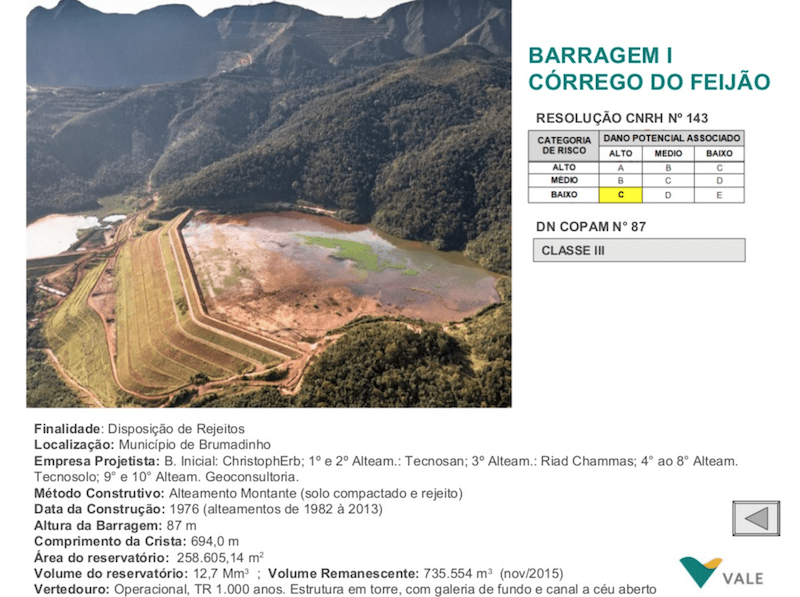 The premise that the event was ‘foreseeable’ by Vale management is demonstrated in the geotechnical tailings dam risk assessment completed by the Vale organisation and its’ advisors.

According to the details on the assessment, the Feijao Dam was constructed in 1976, was 87 m high, holding almost 13 million cubic metres of iron ore tailings waste.

Available reports from Vale indicated that the dam was in the process of decommissioning prior to its failure.

In a media statement on the 26/1/2019, Vale stated  ‘Córrego do Feijão Mine is used to dispose tailings from ore production and was located in Brumadinho, Minas Gerais. It was inactive (no tailings were being added), there was no pond and there was no other type of operational activity in progress. A decommissioning project was also under development.’

Vale said that the dam was built in 1976 by Ferteco Mineração (and acquired by Vale on April 27, 2001), using the upstream method. The height of the dam was 86 meters and had a crest length of 720 meters. The waste disposal area was 249.5 thousand m2 and the volume disposed of was 11.7 million m3.

According to Vale, ‘Dam I had ‘Stability Condition Statements’ issued by TUV SUD do Brasil, an international company specializing in Geotechnics. The ‘Stability Condition Statements’ were issued on 13/06/18 and 26/09/18, related to the Periodic Safety Review of Dams and Regular Dam Safety Inspection processes, respectively, as determined by DNPM Decree 70.389 / 2017.

The dam had a ‘Safety Factor’ in accordance with world best practices and was above the Brazilian Standard reference point. Both of these stability declarations attest to the physical and hydraulic safety of the dam, Vale said.

Vale has highlighted that the Feijao dam went through biweekly field inspections, all of which were reported to Brazil’s ANM (National Mining Agency) through the SIGBM (Integrated System for Safety Management of Mining Dams). The last inspection registered on the ANM system was executed on 21/12/18.

In addition, the Feijao dam underwent inspections on 1/8/19 and 22/01/19 and the inspections were registered on Vale’s own monitoring system. The registration of each inspection on the ANM, according to legislation, must be executed by the end of the following fortnightly period. All these inspections did not detect any change in the state of the structure.

The dam had 94 piezometers (an instrument for measuring the pressure of a liquid) and 41 Water Level Indicators to monitor its integrity. The information from the instruments was collected periodically and all their data analyzed by the geo-technicians responsible for the dam. Of the 94 piezometers, 46 were automated.

The dam had a PAEBM (Mining Dam Emergency Action Plan), as established by Brazilian DNPM regulation 70.389 / 2017. The same was filed in Federal, State and Municipal Civil Defenses between June and September of 2018.

The PAEBM was constructed based on a hypothetical breach study that defined the flooding area. In addition, the dam had a video monitoring system, siren alert system (all tested) and downstream population registration. The external emergency simulation was also carried out on 16/06/2018, under the coordination of Civil Defenses, with Vale’s full support, and internal training with employees on 23/10/18.

So was the tailing dam risk assessment a ‘paper engineering’ activity designed to provide a level of security to shareholders?

Time will tell, but there is no doubt the financial and social impact of the tragedy will be felt for many years in Brazil. While it appears there are many ‘good intentions’ of executives to ensure that critical safety engineering and risk assessment is conducted comprehensively, the disconnect between mining boardrooms and site personnel are continuing to be glaringly obvious with the spate of disasters occurring globally.

Was the Feijao tailings dam a legacy that Vale inherited?

Most probably, however, Vale has had control of the facility since 2001. Typical civil construction methods over the years have changed significantly and therefore the likelihood that dam failures could occur appear more prevalent in older dams.

Vale used detection devices such as piezometers but appears not to have engaged/used ground-penetrating radar or slope stability radars to assess risk. Piezometer failure and limitations are well known in geotechnical engineering.

Where to from here for Vale?

Well on paper at least, Vale looks relatively sound. There’s a paper trail at least! The issues remain between the disconnects in paper trails and reality of the day to day running a mining operation. The entrapment of bureaucracy and ‘safety clutter’ in large organisations sometimes has resulted in workers being divorced from reality. A ‘good safety report’ won’t result in a manager screaming at you’ workers say. Better to provide them with good news than bad….bad news means I might lose my job.

Vale, like many other larger organisations, on the surface, appears to have implemented systems to mitigate the disaster but unfortunately, those systems have failed in this instance and frankly….it’s not been the first time for Vale. Vale’s subscription to the ICMM in 2017 and the ICMM Principles surrounding ‘Preventing catastrophic failure of tailings storage facilities‘ means ????? It couldn’t happen here, could it?

Closer to home the Newcrest Cadia Tailings Dam collapse in March 2018  put Australia on notice of tailings dam collapses and prompted regulators Australia wide to review guidelines on tailing dam containment and tailings dam risk assessment. Newcrest said at the time of the Cadia collapse “The Cadia tailings dams have been regularly inspected, reviewed and monitored; and have been fully certified to industry standards by independent third parties. As a precaution, Newcrest stopped depositing tailings into both dams on 9 March. Operations were subsequently progressively suspended pending further investigation.”

The area of the failure was approximately 270 metres across, with a back-scarp of around 100 metres.  The runout was about 370 metres.

The incident appears still under investigation by Australian regulatory authorities and most probably resulted from a seismic event but nevertheless, it proves that our global tailings dam risk assessment systems for management of geotechnical failures in tailings dams worldwide are not infallible.