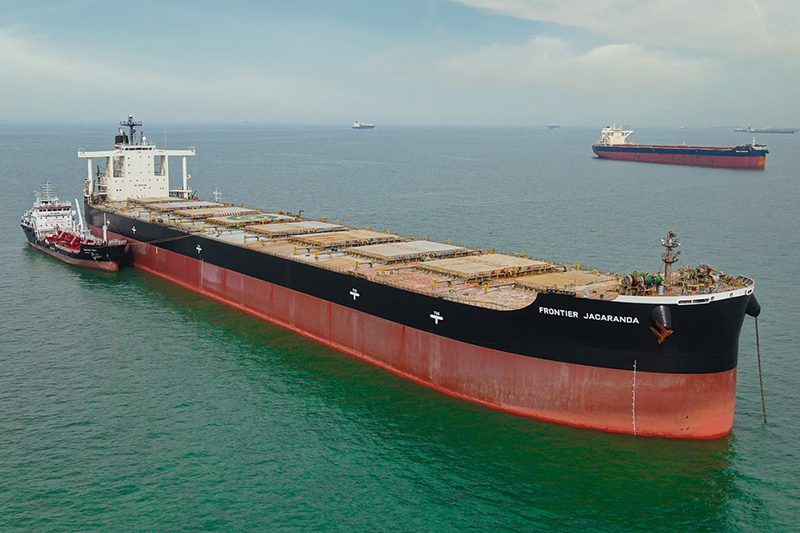 Anglo American has successfully trialled the use of sustainable biofuel to power a chartered capesize ship during a voyage from Singapore to South Africa. The biodiesel blend, produced by converting waste cooking oil from Singapore’s food and beverage industry, reduces carbon dioxide emissions compared to using 100% conventional marine fuel.

Peter Whitcutt, CEO of Anglo American’s Marketing business, said: “Low emission ocean freight is crucial in driving the long-term sustainability of the maritime industry. Shaping an effective transition requires a comprehensive framework of complementary solutions, in which alternative marine fuels have an important role to play.

“We are partnering with like-minded industry players to improve our understanding of factors likely to impact the future scalability of this solution. The success of this trial marks an important step forward in establishing biofuel as a viable option, aligned with circular economic principles. These efforts also reinforce our commitment as an organisation to reduce emissions across the entire value chain, as we work towards carbon neutrality across our operations by 2040.”

The trial conducted onboard the Frontier Jacaranda, a capesize bulk carrier owned by Japanese shipping company NYK Line, was instrumental in verifying the stability of the biofuel in storage and its performance as a fuel.

Data gathered is providing new insights into wider efforts to introduce biofuel to the maritime sector, paving the way to improving its cost-effectiveness and using higher percentage blends in future trials. The conversion of waste cooking oil into fuel for transportation aligns with the principles of the circular economy, by providing a fresh and environmentally beneficial use for what would otherwise be disposed of.

Toyota Tsusho Petroleum supplied the biodiesel blend, consisting of 7% biofuel and 93% regular fuel. This combination reduces carbon dioxide emissions by around 5%, is compliant with the International Standard Organisation’s requirement for marine fuels and requires no substantial engine modifications.

Anglo American is exploring a number of ways through which to reduce carbon intensity in its ocean freight operations, including the use of ammonia as an alternative marine fuel, as well as adding capesize+ vessels into its chartered fleet fuelled by LNG which reduces CO2 emissions by approximately 35%.