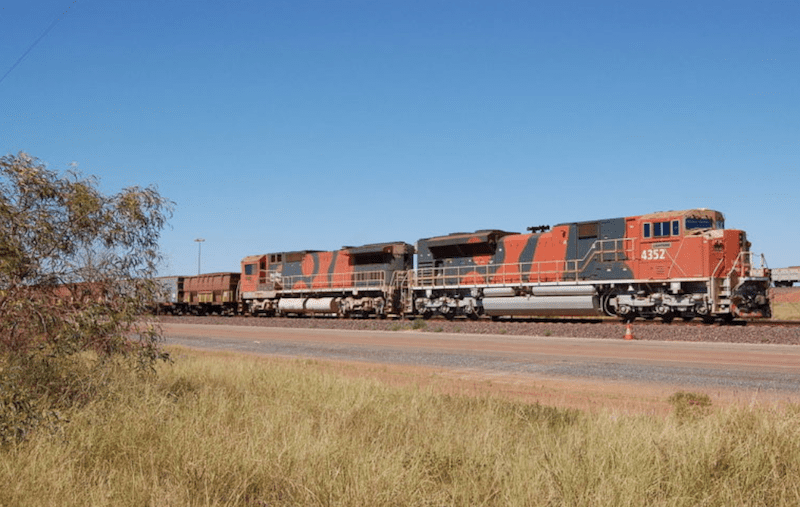 The ATSB has released a preliminary report today into the BHP’s runaway train incident which destroyed two locomotives, 245-ore cars and 2 km of track. The report has highlighted a significant error of a judgement after a maintenance crew locked down the brakes on the wrong train following a call to train control for assistance from the driver.

According to the report, the BHP Redmont maintenance crew were dispatched by the control to assist in applying manual handbrakes following a braking control cable becoming disconnected. In the mix up, the crew stopped at an empty train travelling in the other direction, which had stopped while the problem train issues were investigated by the driver.

The report also highlights the potential breakdown between train systems when, at 3:39 am, communication “between the lead locomotive and the combined end of train monitor was lost.”

The communication systems event activated an automatic emergency brake and the train came to a stop. In accordance with procedure, the train driver made an emergency call to Hedland train control centre.

At the time the train controller blocked signals on the adjacent east track to protect the train from other rail movements and alerted the BHP Redmont maintenance crew.

Train control centre advised the driver that handbrakes needed to be manually applied on the ore cars. He applied the locomotive brake in the driver’s cabin, disembarked the train then commenced undertaking manual braking for each ore car from the front of the train .

He had believed that the maintenance crew would be manually applying brakes from the rear of the train however, they had been applying them on the wrong train.

Around 43 mins after the stopped, the train driver heard a pressure release (air bleeding) from the system then the train started moving forward.

The ATSB said that their on-going investigation will include the examination of factors associated with train-line cable connectors together with the design, operation and serviceability of the locomotive and ore car electrically controlled pneumatic and pneumatic braking systems, and the interface between them at time of the occurrence.

It will also examine the effectiveness of critical control management process in identifying and managing operational risk from a runaway occurrence among a range of other factors.

BHP’s Edgar Basto said in a statement said “procedural non-compliance by the driver as well as integration issues with the electronically controlled pneumatic braking system to the rail network” were at fault.

“Prior to exiting the cabin of the lead locomotive the driver did not apply the automatic brake handle to the emergency position as required in the operating procedure and in accordance with training provided,” Mr Basto said.

“If the automatic brake handle was in the emergency position as per the operating procedure, the train would not have rolled away.

“Our internal investigations also highlighted opportunities to improve the integration of the ECPB system across our rail network.”

Mr Basto said extra measures — including verbal confirmation the manual emergency air brake had been applied before disembarking the train — had been put in place before rail operations resumed to avoid a repeat of the disaster.

The sequence of events (according to ATSB)

The driver had set the throttle control for maximum dynamic braking and commenced moving the Electrically Controlled Pneumatic (ECP) braking control toward a 39 per cent application.

At about 0339, communication between the lead locomotive and the combined end of train monitor (CEOT) was lost, triggering an automated 120 per cent ECP emergency brake application, stopping the train as it approached Garden South.

Shortly after, the driver made an emergency radio call to Hedland train control reporting the occurrence, his location (at the 210.737 km mark between Shaw and Garden), and the details of alert messages displayed to him by the locomotive onboard systems.

The train controller placed blocks to signals on the adjacent east track between Garden South and Shaw North to protect the train (from other rail movements) and contacted personnel from the Redmont[2] maintenance gang to assist the driver. The controller advised the driver that assistance was en route and requested he confirm the train’s location from a kilometre mark[3]closest to the lead locomotive.

The driver stated that the FIRE[4] system displayed 210 km, but would detrain and check the kilometre mark on the ground to confirm. At about 0351, the driver placed the reverser[5]control to the centre (neutral) position, turned the generator field[6] off and fully applied the locomotive independent brake before exiting the locomotive cab. The 120 per cent emergency brake application was active and the automatic brake handle remained set at the position equating to a 39 per cent ECP brake application.[7]

After receiving confirmation of the 210.7 km mark, the controller instructed that 101 per cent handbrakes[8] were required to secure a loaded train on the falling track grade. The controller asked the driver if he wanted to start applying them now or go back up to the locomotive and wait for the arrival of personnel from the Redmont gang. At about 0353, the driver decided to commence applying handbrakes to the 268 ore cars from the front of the train.

At about 0355, an empty ore train (M02727) travelling on the adjacent east track toward Yandi Junction stopped at Garden South due to the blocking protections set up previously. About 30 minutes later, personnel from the Redmont gang advised train control of their arrival at the 210 km mark to assist the driver in applying handbrakes. The train controller suggested the gang start applying handbrakes from the rear of the train and proceed toward the driver who was working from the front.

Hedland control continued to maintain contact with the driver of M02712 at 10-minute intervals during which the driver advised that he had found a disconnection in the train-line cable. The train-line cable was located on the opposite side of the train and not accessible safely, so the driver continued to apply handbrakes to secure the train. During one of the scheduled calls, the driver reported to the controller that the application of handbrakes was progressing well despite having trouble walking along the ballast shoulder next to the stationary train.

The driver also reported that he was aware the Redmont gang had arrived to check the integrity of the rear of the train and to apply handbrakes. The driver said that he planned to continue working toward the locomotives mid-train, report to train control then return to reinstate the break in the train-line cable.

At about 0440, the driver heard air venting from the ore car brakes and shortly after noticed the train begin to move forward.

The driver first attempted a radio call to the Redmond gang alerting them that the brakes had ‘bled off’ but there was no response. Shortly after train M02712 began to roll away, the ATP system requested a penalty brake application but it was ineffective in stopping the train.

About four minutes later, the driver of the empty ore train standing at Garden South (M02727) contacted train control advising train M02712 was moving and had passed his location at an estimated speed of about 50 km/h with brakes dragging.

At 0446, train control received an emergency call from the driver of M02712 alerting that the brakes had bled off and the train was now a ‘runaway’.

Train control acknowledged the emergency call and advised he had set signal GNN4 at Garden North to red, attempting to stop the train by triggering the locomotive on-board automatic train protection system. Train M02712 passed signal GNN4 at about 80 km/h and continued to increase in speed.

Although the ATP system requested a penalty brake application in response to signal GNN4 at red and to an over speed, these penalty applications were also ineffective in stopping the train.

At about 0502, the driver of the empty ore train (M02727) stopped at Garden South, contacted Hedland control advising that the Redmont gang had mistakenly applied handbrakes to his train rather than to train M02712.

Train M02712 continued through Spring and Coonarie reaching a speed of 162 km/h before slowing on the rising grades toward Woodstock (Figure 2). At about 0509, train M02712, travelling at about 128 km/h, passed over the level crossing at the 154.3 km mark before Woodstock South. After Woodstock, the track grade again began to fall toward Port Hedland and train M02712 gained speed to about 130 km/h as it passed train M02728 stopped at the 130.5 km mark on the eastern track north of Abydos.

At about 0520, Hedland control set the crossovers at Turner South and Turner North to switch train M02712 between adjacent tracks in an attempt to derail it as the traversed the crossover at speed. About six minutes later, the head end locomotives travelling at 144 km/h traversed the crossover at the 119.4 km mark at Turner South. Locomotives 4420, 4434 and the first ore car remained coupled and on track, travelling about 1.6 km further before stopping. Ore cars in position two to 134 of the first rake, the remote locomotives 4472 and 4440 and ore cars one to 112 from the second unit rake derailed near the crossover. The last 22-ore cars of the second unit rake remained coupled and on track.

You can read the full ATSB report here.