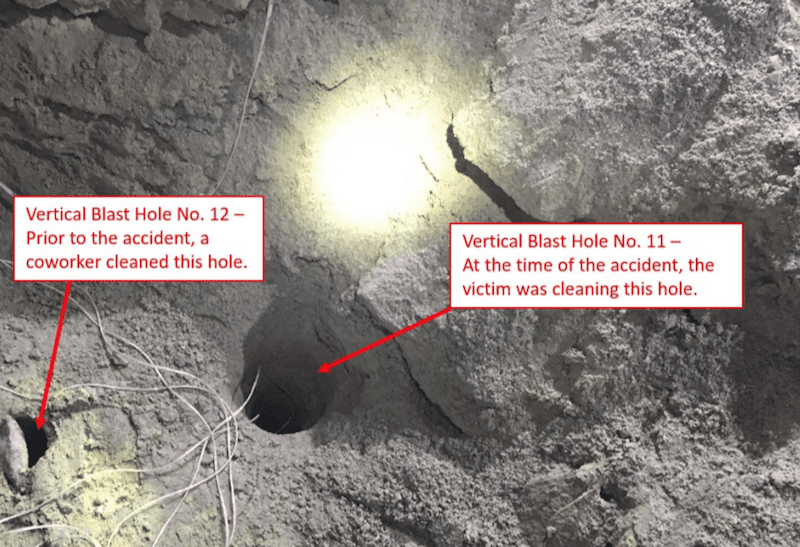 The US Mine Safety & Health Administration has released an accident investigation report outlining a fatal incident where a 20-year veteran mine worker was hit in the chest with stemming materials while trying to clear a blast hole with a compressed air line.

At 7:30 a.m., DeMasters, Floersch, Tracy and Derric Dave Paro, (Manager for Hilltop Energy Inc). and a licensed blaster entered the elevator cage and descended to the 3100 level of the underground mine.

The four travelled to the MP2730 level to examine the construction of a stope on the MP2805 level.

DeMasters, Floersch and Tracy began checking the area where Empire State Mines initiated a 19-hole shot after the shift on the previous day. They determined four of the holes in the shot did not break through and drop the estimated amount of rock to the drift below, as designed.

Therefore, Floersch and DeMasters decided to reload two of the holes, No. 11 and No. 12, with explosives for a subsequent blast. Both holes were cleaned out using a high pressure compressed air line (a 7/8-inch diameter, high density, polyethylene air hose referred to as a grout line), operating at a pressure of approximately 115 pounds per square inch (psi) or 793 kPA. The No. 11 hole was a wet hole and was loaded with 1.5-inch diameter stick powder emulsion.

The No. 12 hole was a dry hole and was loaded with ammonium nitrate/fuel oil. Both holes were stemmed with approximately 50 pounds of sand.

When Robert R. Woodard, Blaster for Dumas, arrived at MP2730, he cleared the surrounding areas for a blast. Paro tested the blasting circuit to ensure all components were properly tied in and functional. At 11:10 a.m., Floersch, DeMasters, Tracy and Paro travelled to a safe area away from the holes and Paro initiated the blast.

After waiting approximately 30 minutes for the smoke to clear, Floersch, DeMasters and Tracy re-entered the area. Again, they decided to clean out the holes to determine if they had broken through to the drift below.

Floersch used the grout line to clean the No. 12 hole, while Tracy operated the ball valve for the compressed air line, approximately 15 feet away. After cleaning the No. 12 hole for 15 to 20 seconds,

Floersch inserted the grout line into the No. 11 hole. It hit an obstruction approximately 30 feet down the hole. After Floersch failed to push the grout line through the obstruction, Tracy turned off the air. DeMasters then took the grout line from Floersch and instructed Tracy to fully open the ball valve and give it full air.

Floersch stepped directly behind DeMasters, while DeMasters kneeled with his torso positioned over the hole, as he tried to push the grout line through the obstruction.

Approximately 15 seconds later, a loud pop sounded and the area filled with stemming material propelled from the hole.

Tracy immediately closed the ball valve and Floersch ran a short distance from the hole. When Floersch turned around, he saw DeMasters lying over the hole.

Floersch and Tracy ran to DeMasters and found him unresponsive, but noted he appeared to be breathing. Floersch then notified Paro and Woodard that DeMasters was badly hurt and needed help.

Woodard used a nearby mine phone to notify the hoist man of the accident and request he dispatch the mine rescue team and call for an ambulance. Woodard instructed Tracy to remain at the mine phone while he returned to the accident scene.

Approximately 15 minutes later, three members of the Empire State Mines’ mine rescue team arrived and rendered first aid to DeMasters while placing him on a stretcher for transport out of the mine.

At 12:00 p.m., DeMasters and the team members were hoisted to the surface where they were met by the Gouverneur Rescue Squad. The rescue squad transported DeMasters to Gouverneur Hospital where he was pronounced dead at 12:33 p.m.

INVESTIGATION OF THE ACCIDENT

David R. Riggleman, Superintendent for Empire State Mines, called the Department of Labor National Contact Center (DOLNCC) at 12:20 p.m. on October 2, 2018, and notified MSHA of the accident. DOLNCC notified Joseph Denk, Staff Assistant at the Northeastern District office. MSHA issued an order under provisions of Section 103(k) of the Mine Act to ensure the safety of the miners.

The accident occurred on the MP2730 level of the underground mine where a vertical stope was being developed to the MP2805 level below.

The compressed air for the mine is generated by two compressors that work in tandem to supply compressed air to an approximately 4,200-gallon receiver tank on the surface.

The tank has safety valves set to prevent over pressurization. The underground air supply lines are fed from the air receiver tank. A 12-inch diameter steel pipe exits the tank and runs down a shaft into the mine. The piping necks down in diameter several times from the 12-inch diameter pipe to the 7/8-inch diameter grout hose used by the contract employees to clean vertically drilled holes.

As a result of the successive reductions in conduit diameter, a very high airflow velocity is created at the end of the hose. The airflow velocity measured exiting the grout hose was approximately 8,250 feet per minute (137 feet/second or 94 miles/hour). 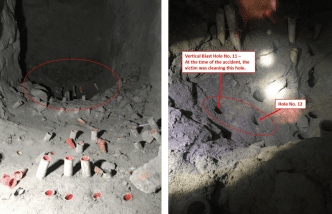 The high-pressure air hose used by the victim to clear the borehole was a high-density polyethene (HDPE) hose used for grouting. The contract employees referred to this hose as the grout line.

The 7/8-inch diameter hose had a nominal 3/4-inch internal diameter with 1/16-inch wall thickness. The specification sheet of the hose listed a working pressure rating of 170 psi and a burst pressure rating of 820 psi. Measurements taken during the investigation showed an approximate pressure of 115 psi at the end of the grout hose.

The hose was in a degraded condition with 9 hose splits and multiple kinks in the first 9 feet 4 inches of the hose, as measured from the hose opening . The hose splits were consistent with a hose burst, as the damage was from the interior of the hose. As shown in Figure 5, the entire working length of the outside of the hose showed very fine, hair-like fibres probably caused by abrasions.

A borescope was used to obtain video footage of the interior of the 3-inch diameter, No. 11 vertical drill hole to evaluate conditions within the hole. The evaluation of the borehole along its entire length found no

evidence of residual explosive material left in the hole. The drill hole was clear of obstruction for the first 31.5 feet in a hole that was drilled 34.25 feet below the collar. This indicates at least 2.75 feet of roof and bottom of the borehole fell into the muck in the preceding several days. The borescope showed no large cracks, voids or intersections with another borehole.

Interviews indicated one 50-pound (22.6 kg) bag of sand was used as stemming in each borehole, which Major Drilling Underground claimed would fill about 10 feet of a drilled hole.

The No. 11 drill hole was a wet borehole and would have caused the sand to bond together, making it harder to clean out the hole.

After reportedly blowing out approximately 3 feet of material, the contractor encountered a blockage. As the grout hose was pushed through the blockage, a pressure void was filled with the compressed air until it could no longer be contained. When the air released, a column of stemming was thrust to the surface of the borehole.

This evacuation of air and stemming material struck the contractor foreman, who was in close proximity to the borehole opening, causing fatal injuries. No evidence of residual explosive material was found in the hole.

Training and experience of the miner

Brendan DeMasters had 20 years of mining experience, including over four years as a drill operator for Major Drilling Underground. DeMasters worked as a foreman/drill operator at this mine for 16 weeks.

A representative of MSHA’s Educational Field and Small Mines Services staff conducted a review of the mine operator’s training plan and records. On January 14, 2018, DeMasters completed his most recent annual refresher training, as required by law.

However, the contractor could not provide documentation showing DeMasters received task training, as required by 30 CFR 48.7(a), addressing the hazards associated with the cleaning of vertical blast holes using high pressure compressed air and plastic hoses.

The accident investigation team also reviewed the training records for two contract employees (Nicholaus J. Floersch and Corey L. Tracy) working with the victim on the day of the accident.

Similarly, the contractor could not provide documentation showing these employees received task training addressing the hazards associated with the cleaning of vertical drill holes. MSHA issued a noncontributory citation during an E16 Spot Inspection for this violation.

The accident investigation team conducted a root cause analysis to identify the underlying cause of the accident. The team identified the following root cause and the corresponding corrective action implemented to prevent a recurrence.

Root Cause: Contract management did not ensure adequate procedures to protect persons working with compressed air while cleaning out an obstruction in a vertical drill hole, including positioning of personnel during this process.

Corrective Action: The contractor developed a plan and procedures and then trained employees on the new plan with procedures for cleaning previously blasted vertical drill holes when an obstruction has been encountered. This plan addresses safe work procedures and where personnel are to be positioned during the various phases of drill hole cleaning process.

While kneeling, with his torso positioned over the hole, DeMasters tried to push the grout line through an obstruction approximately 30 feet in the hole.

A sudden release of pressure propelled remnant stemming material from the hole, striking DeMasters in the chest. 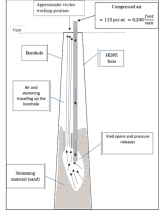 Contract management did not take all necessary precautions to protect persons working with compressed air while cleaning out an obstruction in a vertical drill hole, including ensuring that personnel were safely positioned during the procedure.