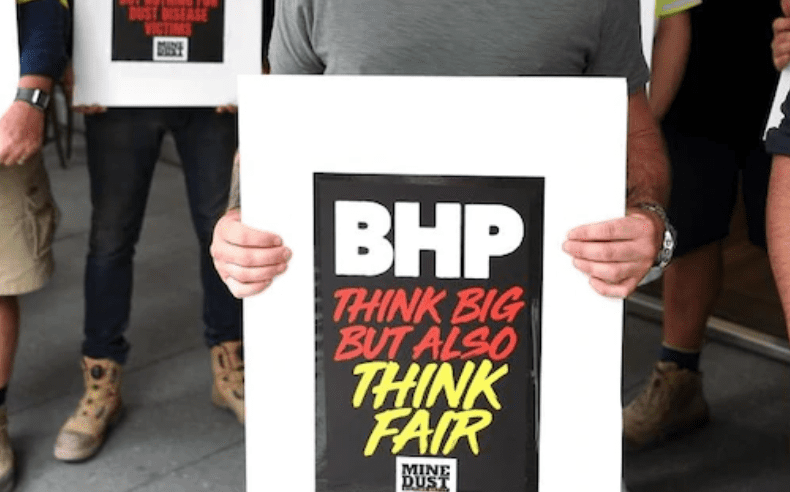 Mine Dust Diseases Victims Group is seeking to establish a fund to provide on-going assistance for compensated coal mine workers following the cessation of workers compensation payments.

Jim Pearce, a former coal miner and former Queensland member for Mirani, said more than 100 mineworkers have now been diagnosed with mine dust diseases in Queensland and there may be many more.

“Nobody has taken up the challenge of trying to look after these guys.”

An industry-backed fund needs to be started to help victim’s with medical and living expenses, Mr Pearce said.

While BHP says it’s deeply concerned by cases of black lung and other mine dust lung diseases, it has not offered support for the sick miners. BHP said in a statement ‘We continue to monitor dust exposure at all our mine sites and our internal dust exposure limits are more stringent than regulatory limits anywhere in the country.

The Mine Dust Diseases Victims Group wants a levy of 1c per tonne, per week placed on coal to go into the fund for sick workers and their families.

In October 2018, the CFMEU called for independent monitoring of dust levels to help manage the worsening mine dust disease crisis including black lung and silicosis.

The CFMEU had requested that the Queensland Government utilise Safety in Mines Testing and Research Station (Simtars) to undertake monitoring and inspection after last year the CFMEU Queensland President said that the regulator was a joke.

“The mining companies see the regulator as a joke, they really do, because the regulator rings them and tells them ‘we’re coming to the mine site’,” Mr Smyth told ABC’s 7.30 in June last year following the death of former miner Tyrone Buckton.

Stephen Smyth later said that ‘Simtars has the expertise and independence to carry out monitoring in the best interests of workers.’

“The government has initiated some important measures to address the shocking re-emergence of black lung and other mine dust diseases. In particular, we welcome the reduction in allowable dust levels recently announced.

“But much more action and investment is needed if we are going to stem the growing tide of shocking diagnoses of deadly mine dust lung diseases like ‘black lung’, silicosis and emphysema.

“We need to introduce independence to dust monitoring and medical assessments, to make sure companies can’t cut corners or cover up poor results when it comes to workers’ health.

“In our experience, some companies are doing the right thing and taking dust exposure seriously, while others need to be forced to take responsibility.

“We also need greater protections for workers who are too often thrown on the scrap heap when they receive a dust disease diagnosis,” he said.