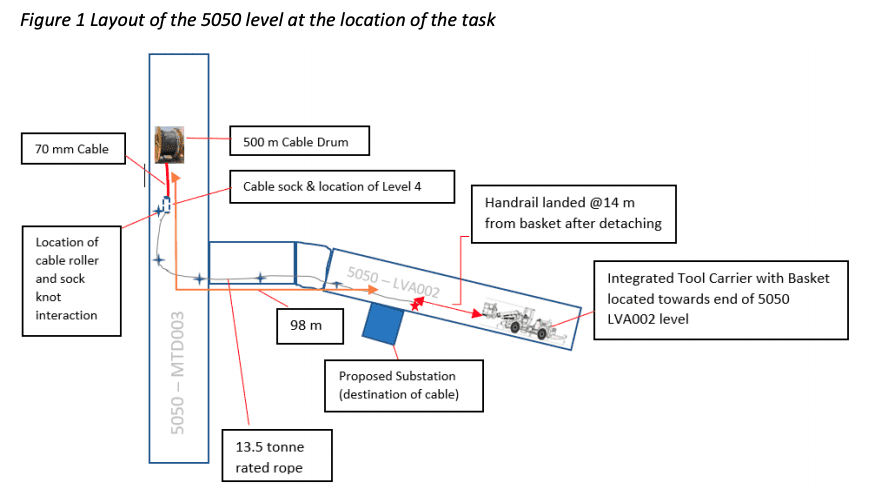 The NSW Resources Regulator has released an investigation information regarding to an electrician had injured when pulling electrical cable at Cadia Valley Operations, NSW.

On 1 September 2020, electricians working on the 5050-level underground at Cadia East Operations were installing a high voltage (HV) cable from an integrated tool carrier (ITC) man-basket.

During the pre-shift meeting, the workers were verbally provided with work instructions, however, there was no documented procedure available.

The workers decided to undertake a process which they believed was similar to one used at another mine interstate. This involved using an integrated tool carrier (ITC) to pull the cable through a series of rollers using a rope attached to a cable sock and attached to the man-basket on the ITC. This process had reportedly been used at Cadia East previously but was never subject to risk assessment or documented in a procedure.

The workers arrived at their work location at the 5050 level at approximately 9:30pm and started setting up for the task. This involved an inspection of the area to review the work which had been undertaken during the previous shift and the completion of a ‘Pre-Task Hazard Assessment’ (PTHA – refer to Figure 2). As part of the assessment, the workers acknowledged that there were no safe work instructions or similar documentation to carry out this task. Furthermore, the PTHA did not identify the potential for propelled objects even though they were looking to apply tension to a line. Although the mine had developed a specific critical control for tension lines, this was not implemented by the workers.

Once the assessment had been completed, the crew split up to attend to their specific tasks. One of the workers was assigned as the ITC operator. He attended to the ITC and drove to a stockpile to collect the cable drum and stand and relocated these to the start point in preparation for the cable pull. He then changed the ITC attachment to a man-basket and two other operators got into the man-basket. The two workers in the man-basket then began to feed the rope through the various rollers and supports which were hanging near the wall/roof interface as the ITC was directed along the path of the cable run ending at the proposed substation location, known as the 5050 LVA002 level.

At around the same time, an electrical supervisor arrived at the cable location to check on progress and helped the other worker to attach the rope to the cable pulling sock, which had already been attached to the HV cable. A picture of the cable and sock pulling arrangement is shown in figure 3.

At the other end, two workers attached the rope to a tubular rail section located within the man-basket. After an adjustment was made to the location of the pulling rope with the installation of an additional roller, the crew was ready to start the cable pull. Figure 4 shows the location of the section of handrail that was on the ITC side of the man-basket and figure 5 shows a cable roller used in the work task. It is evident in figure 5 that the rope that was attached to the ITC man-basket and cable had slipped off the
roller and was likely to have provided extra tension to the line during the pull.

Workers in the man-basket and at the cable drum provided radio confirmation to each other and the ITC was instructed to begin reversing to take up the initial rope slack. As the ITC continued to reverse, a worker located at the drum end confirmed via radio that the cable had passed through the first roller in the circuit. At the time this was communicated, both workers in the man-basket observed a sudden increase in the tension of the rope. One of the workers tried to signal by hand to the ITC operator to stop, while another worker at the drum end advised the ITC operator by radio to stop the task after noticing the rope binding up in a roller.

At this point, the tension applied on the rope was enough to deform the tubular rail section it was attached to in the man-basket. The rail section catastrophically failed and recoiled as a result of the stored elasticity in the rope. A picture of the rope and failed tubular section at its final resting place is shown in figure 6. One of the workers was in the direct line of fire and recalls hearing a ‘cracking/ripping’ noise and then suddenly feeling ‘winded’ and breathless. He reported being overcome by pain and was immediately assisted by his co-worker. The co-worker realised what had happened and called in an emergency on the radio.

The worker suffered injuries consistent with blunt force trauma to his left torso and was transported to Orange Hospital via the mine’s ambulance. Figure 7 shows the approximate location of the workers in the man-basket at the time of the incident.

The causal factors for this incident have been separated into three distinct areas:

No specific documented procedures for this task

The investigation found there were no documented safe work procedures for the specific task of pulling HV cable through rollers suspended from the roof. The work instructions received by the workers prior to commencement of the task did not include any procedure to safely install the HV cable, as
communicated to the work crew.

A PTHA (a form of personal risk assessment completed at the job site prior to commencing a job) was completed by the work crew who acknowledged the absence of any installation procedures. The crew also acknowledged and deemed themselves to have the relevant trade, training, competencies and authorisations to carry out the task without safe work procedures, including any specific Job Safety and Environmental Analysis (JSEA) or risk assessment. The task had been frequently undertaken and there was a perception that the job steps were well understood. Consequently, the PTHA was deemed by the workers as sufficient to manage any risks.

In completing the PTHA, the crew did not identify ‘propelled objects’ (uncontrolled release of energy) which was categorised as a major hazard by the mine, even though a rope and cable were to be placed under tension during the task.

The handrail anchor point for the pulling rope was not designed for this purpose and should not have been used. A working at heights standard in place at the mine at the time of the incident, identified handrails as being ‘non-compliant’ anchor points for fall arrest systems. While this standard or any other related standard did not specify anchor points for pulling or towing, the crew did not consider that if the anchor point was not rated for fall arrest it would also not be rated for pulling or towing, given it would be subjected to much greater forces. Consequently, the crew did not identify a ‘line of fire’ scenario because the possible failure of the handrail had not been considered.

The investigation found the workers were trained for the specific roles of operating the ITC, working out of a man-basket and were qualified as electricians.

While workers were found to be competent in their specific job roles, the competency associated with the actual task of pulling HV cable through a series of rollers was inadequate. Despite having performed this task on many occasions prior to the incident, a level of complacency had set in and there was a perception that the practise was safe. The PTHA completed for the task, while providing a ‘prompt’ for consideration of major hazards including the uncontrolled energy release, provides further evidence of the lack of understanding of the risks associated with the task.

If the mine had undertaken an appropriate risk assessment for the task prior to developing a documented procedure (followed by appropriate training and verification of competency) it is foreseeable that the risk of serious injury may have been eliminated or minimised.

Fit for purpose tools and equipment

The use of any part of a man-basket, including a section of handrail for a towing anchor point, was not appropriate. Regardless of the lack of a documented job procedure, the workers, including the electrical supervisor, should have been aware of this. The working at heights procedures at the mine stated that the handrail in the man-basket was not suitable for a harness attachment point. It is reasonable to expect that a worker could estimate that the forces associated with towing would significantly exceed those associated with working at heights, thus deeming the handrail unsuitable for towing. The workers had not turned their mind to a potential failure of the handrail, given their positioning in the man-basket during the task. A defect (bend) in the handrail had also been present for about six to seven years further highlighting the possibility of the handrail failing during this task.

It was identified during the investigation that no anchor points within the man-basket had been subjected to a pull test or NDT testing, regardless of calibration tags being attached and a rating applied (i.e. safety harness anchors are rated to four tonne). It was further identified that the last monthly inspection carried out on the man-basket required the maintenance worker to visually inspect for cracks, damage, wear, corrosion and sharp edges, however, the deformed and corroded handrail was not identified as a defect. Had this section of handrail been identified as needing repair, it may have prompted an investigation as to why it had permanent deformation, and possibly uncovered prior improper use.

The cable rollers used in the task were not fit-for-purpose for pulling cable around a corner. Photographic evidence from the incident suggests that the rope attached to the cable had become snagged in at least one of the cable roller axles (refer to figure 5). It is assumed the snag was a contributing factor of an unexpected tension applied to the rope and anchor system (handrail) used in the task.

The mine operator is in the process of implementing the following key corrective actions:

Section 19(3) of the WHS Act prescribes that mine operators must provide adequate information, training and instructions to protect workers from risk.

Mine operators should review their safety management systems to ensure: