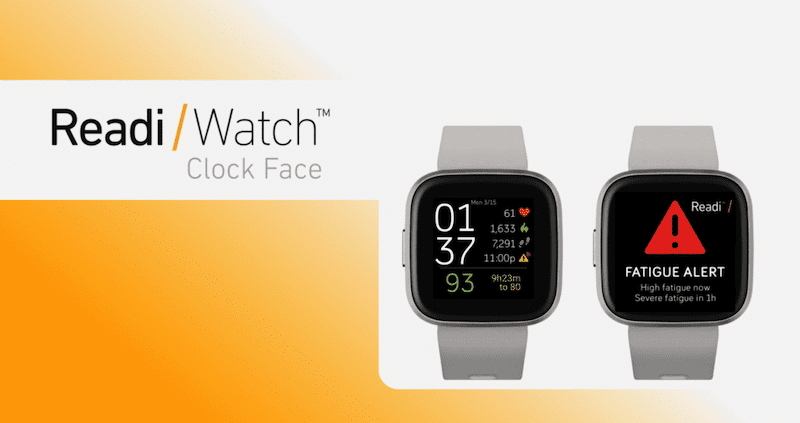 Fatigue Science, the global leader in providing human fatigue and performance predictive analytics and fatigue management information systems to heavy industry, military, and elite sports teams, is pleased to announce the launch of the ReadiWatch Clock Face on Fitbit devices as part of its Readi fatigue management platform.

Targeted at industrial operators in mining, oil & gas, and other heavy industry verticals, the ReadiWatch Clock Face is made possible by a breakthrough integration with Fitbit smartwatch devices. With the new experience, workers can receive vibrating, on-duty Fatigue Alerts right on their wrist — even without a phone nearby or data connectivity. Workers receive Fatigue Alerts one hour before they reach elevated and critical levels of fatigue risk.

Additionally, the ReadiWatch Clock Face enables Fitbit users to view their current ReadiScore, indicating fatigue level and a countdown to when they’re likely to face elevated or critical risk without further sleep — providing a complete picture of fatigue awareness right from the wrist.

“For our customers, operator fatigue awareness is one of the core pillars of a multi-faceted defence against fatigue risk. On-wrist Fatigue Alerts has been a huge success since we launched them on Fitbit and Garmin devices a year ago,” says Robert Higdon, SVP Product & Marketing of Fatigue Science. “Listening to customers, one of their biggest requests since launch has been for these alerts to be available offline to enable fatigue awareness in environments where workers may not have phones or data connectivity. We’re pleased to be able to deliver on this need, empowering safety and productivity for more users in more industrial environments.”

“Our mining and industrial customers who have achieved the greatest success in enhancing productivity and reducing risk have done so by using Readi to implement a multi-layered system of defences against fatigue,” adds Andrew Morden, President & CEO of Fatigue Science. “Leadership and HSE teams often use Readi to assess schedule-based sleep opportunity and compare it to actual fatigue exposure, and supervisors use Readi to intervene on critically fatigued workers ahead of time. But at the core of any successful strategy are the workers themselves. We’re pleased that with the ReadiWatch Clock Face on Fitbit, we now offer operators the most engaging and frictionless experience for personal fatigue awareness of any offering in the fatigue management industry.”