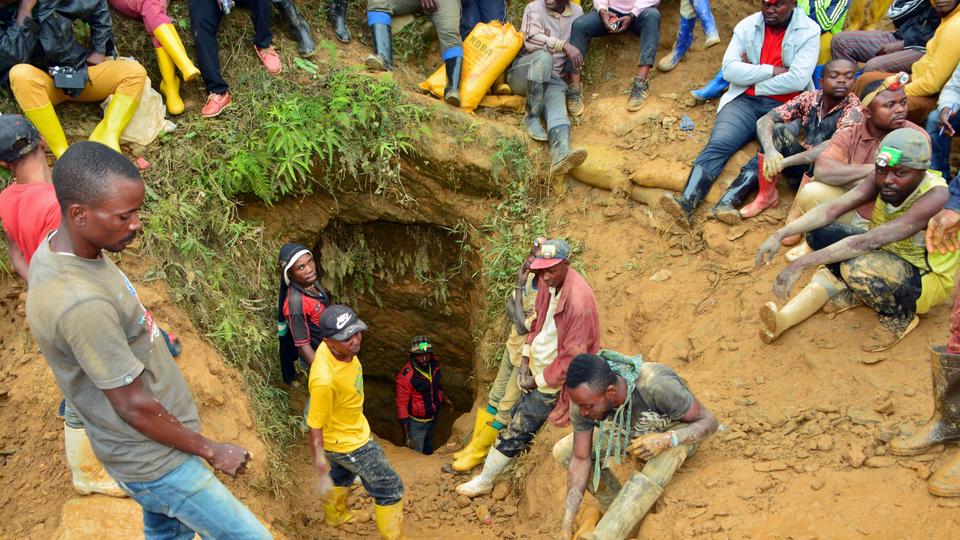 Miners searching the site near the town of Kamituga have so far recovered 18 bodies, after heavy rains caused the artisanal gold mine to cave in, burying those working below ground.

Emergency workers have recovered the first bodies of miners who perished in a disaster at a makeshift goldmine in the eastern Democratic Republic of Congo.

A total of 18 bodies have been recovered to nearby mining town Kamituga, according to a local resident at the scene, Jean Nondo.

The governor of the South Kivu province has said that 50 miners had died, caught underground when heavy rains flooded their mine on Friday.

“When people wanted to get out, there was no way to because the water was pouring in at a great pressure,” Nondo said.

Kamituga mayor Alexandre Bundya said he did not know how many miners were working at the time of the flooding, but that 19 families were searching for missing loved ones.

For a second day running, hundreds of people gathered at the site as emergency workers brought the first bodies out and into nearby tents, video footage viewed by AFP showed.

While the emergency workers were working with shovels and their bare hands on Saturday, by Sunday a hydraulic shovel had been brought to the site to help them with their work.

The mine was on a concession held by Kamituga mining, a subsidiary of Canadian gold mining company Banro, Raoul Kitungano, of the Congolese campaign group Justice Pour Tous (Justice for All), told AFP.

Banro announced in September 2019 it was suspending its operations there.

The mine was thus left to the artisanal miners, who earn their living by selling the minerals they manage to dig up themselves to local traders, who sell it on to large foreign companies.

Accidents in DRC’s makeshift mines are common and often deadly.

In June 2019, at least 39 men died when a copper mine in Kolwezi, in the southeastern Katanga region, partially collapsed.

Because many such mines are in remote areas however, the accidents are under-reported. DRC has huge reserves of gold, cobalt, copper and coltan.

It is the world’s largest producer of cobalt, crucial for making the batteries used in mobile phones and electric vehicles.

DRC’s mineral-rich but volatile east faces regular attacks from a plethora of militias and rebel groups which operate freely in the region.

Survivor recalls horror after mine collapse

Kinyenye Furaha passed out from shock when he realised a mine collapse in eastern DRC had buried more than 50 fellow miners including his brother, he said on Sunday, as the hunt continued for bodies two days after the disaster.

Miners searching the site near the town of Kamituga have so far recovered 18 bodies, after heavy rains on Friday caused the artisanal gold mine to cave in, burying those working below ground.

Before the rain started, Furaha had left the site to remove some large rocks. Soon after, a child ran up to say water was rising in the mine, Furaha told Reuters.

“We went back there and found only the pit filled with water. And that’s when I lost consciousness,” he said.

Dozens of people die each year in accidents in largely unregulated artisanal mines in DRC, where often ill-equipped diggers borrow deep underground in search of ore.

This time, miners were caught out because the wet season is yet to get fully underway, said Kamituga Mayor Alex andre Bundia.

“The main problem is that people did not heed the rain,” he said outside his office in the mining town in DRC’s mountainous and mineral-rich South Kivu province.

Scores of men in rubber boots gathered again on Sunday at the mine site on a muddy hillside. A rescue team passed sacks of earth out of the pit in the search for the buried miners, who are all presumed dead.

Back in Kamituga, women gathered to mourn their lost relatives. Sitting close together on the floor, they stared into the distance without speaking, while one held a sleeping baby to her chest.

TagsAFRICA Copper Mine Fatality gold mine gold mine fatality