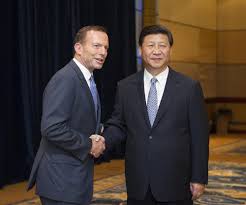 Yesterday’s signing of an historic Australia-China free trade agreement has been applauded by mining chiefs, who say it will boost a flagging resources sector and provide momentum for the Australian economy.

The agreement, signed by Australian Prime Minister Tony Abbott and Chinese President Xi Jinping, will contain measures to provide a tangible boost to the national resource industry including abolishing or phasing out tariffs on a range of export commodities including coal, copper and aluminium.

Chief Executive of the AMMA, Steve Knott congratulated the Australian Government on reaching the agreement saying, “This agreement marks an important new chapter in our relationship with the world’s second largest economy and will create further opportunities for the resource industry, other sectors of our economy and the wider Australian community.”

“Our resource industry accounted for $84 billion worth of exports to China in 2013. That’s about 80% of Australia’s exports to China and an incredible 26% of total annual exports,” Mr Knott said.

“Bringing our economies even closer together will encourage further investment and interest in Australia’s commodities. This has the potential to deliver direct and indirect economic and employment benefits for Australians for decades.”

“This bilateral agreement will also benefit China through the establishment of the Shanghai free-trade zone, and the reduction or removal of tariffs and regulatory barriers to services, which will encourage the spread of Australian innovations and open up significant new opportunities.”

A statement released by the NSW Miners Council said, “China represents the second largest market for NSW coal behind Japan.  The Chinese demand for NSW coal has had significant growth over the last five years.  In 2007-08, only 1.1% of NSW coal exports were going to China.  China now accounts for over 22% of all NSW coal exports, with demand continuing to grow due to the quality of our coal compared to our competitors, and ongoing growing Chinese energy demand.”

“China is an important source of job-generating investment in a range of NSW coal and minerals projects. The new FTA should help make NSW an attractive market for further Chinese investment, delivering jobs and growth over the long term.”