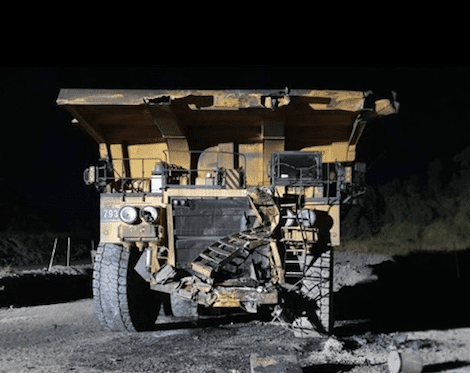 A serious collision between two haul trucks on ANZAC Day at the BMA Saraji mine is currently under investigation by the Queensland Mining Safety Regulator.

A Caterpillar 793 reportedly being operated by an experienced labour-hire contract operator collided with another truck causing extensive damage. At this stage, the cause of the incident has not been determined but personnel told AMSJ that one of the primary contributors to the serious incident may have been operator error.

A BMA spokesperson also confirmed the incident and told AMSJ “Contact between two dump trucks occurred at an intersection on the main haul road at Saraji mine on Saturday, April 25.”

” Fortunately the operators of both trucks sustained no physical injuries, and have been supported and monitored since the incident.”

The Queensland Resources Regulator was notified and a representative attended site on Sunday morning.

BMA says that the Queensland mine safety regulator has launched its own investigation in addition to the Incident-Cause-Analysis-Methodology (ICAM) report that is being undertaken by BMA.

“That report will ensure we understand the factors that led to the incident occurring and can take the necessary actions to manage the risks that are identified,” a BHP spokesperson said.

The incident has highlighted a need to expedite automation according to BMA.

BMA’s James Palmer has been a long time advocate of the safety benefits of fleet automation across coal mines.

“Autonomous haulage will help us improve safety and productivity performance, and it is our people who will be at the centre of making this change a success” he previously told AMSJ.

Six months ago, Palmer announced the rollout of automation at the Goonyella Riverside mine in Central Queensland and BHP globally has committed almost 1 billion to the automation of its fleets. Automation is expected to drive improvements in productivity and safety according to past experiences across Western Australia’s Iron Ore operations.

A BMA spokesperson told AMSJ, “Given that internal investigation is still active, we aren’t looking to comment further on the specifics of the incident, however, it highlights one of the key reasons that automated haul trucks are being introduced at our Goonyella Riverside mine and are now being considered at Daunia – because it will make them safer.”