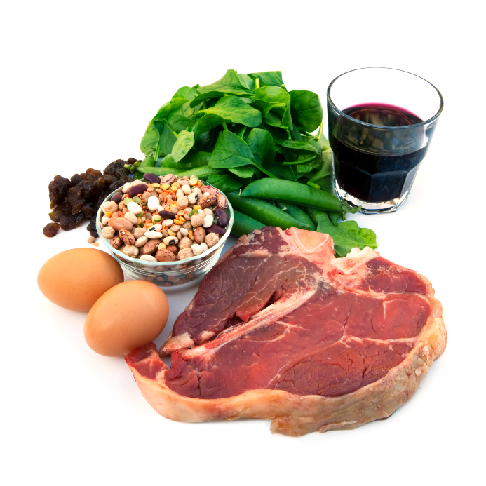 Shift workers who eat high-iron foods at night may be disrupting the circadian clock in their livers and adversely affecting their health, according to a new study.

In a new study in Diabetes online, University of Utah researchers show that dietary iron plays an important role in the circadian clock of the liver. Judith A. Simcox, Ph.D., a University of Utah postdoctoral fellow in biochemistry, is the study’s lead author.

“Iron is like the dial that sets the timing of the clock,” Simcox says. “Discovering a factor, such as iron, that sets the circadian rhythm of the liver may have broad implications for people who do shift work.”

Each of the body’s circadian clocks operates on its own schedule to perform its necessary functions. The circadian clock in the brain, for example, is set by light, telling people to wake up in the morning and sleep when it’s dark. Ideally all the body’s clocks would work on their correct schedules. But, as anyone who has ever been on a graveyard or swing shift knows, working off-hours can cause one’s circadian clocks to get out of synch and disrupt sleeping and eating patterns.

Numerous studies have found that shift workers experience higher incidents of obesity, diabetes and other metabolic disorders. The risk for cardiovascular disease, stroke and cancer also is higher among those workers. In 2007, a World Health Organization subcommittee declared that shift work is probably carcinogenic.

The liver’s circadian clock is set by food intake. As people sleep this clock helps maintain a constant blood glucose level, but then causes it to spike just before they wake up. When the clock in the liver gets out of synch with the one in the brain, it may contribute to metabolic diseases, according to Donald A. McClain, M.D., Ph.D., University of Utah professor of medicine (endocrinology) and biochemistry and senior author on the study.

McClain and Simcox wanted to identify external signals that set the circadian clock in the liver. They fed iron to mice as part of their natural eating cycle and observed that dietary iron increases the cellular concentration of heme, an oxygen-carrying iron compound found in hemoglobin. They found that when heme binds to a circadian protein-a substance whose function Simcox likens to that of a cog in a mechanical clock-the protein’s activity increases and causes the liver to optimally control blood glucose levels.

Increased activity of a circadian protein is healthy when it occurs in the liver’s natural clock cycle. But if this happens at a time that is out of synch with the circadian clock, such as during a graveyard shift, it could result in abnormal blood glucose levels.

“When a shift worker eats foods high in iron at night it could exacerbate the lack of synchronization between the clock in the liver and the main one in the brain,” says McClain, who’s also the University Health Sciences’ associate vice president for clinical research and director of the Center for Clinical and Translational Science. “By tending to flatten the circadian variation of metabolism, high iron in tissues may also interfere with the normal day to night fluctuations associated with a healthy metabolic system.”

More research is needed to see how the results of their study could affect dietary recommendations for everyone, and shift workers in particular. The investigators are quick to point out that too little iron is also unhealthy. Ultimately, they hope their studies define an optimal range of iron that is much narrower than the current “normal” range.

The above story is based on materials provided by University of Utah Health Sciences.