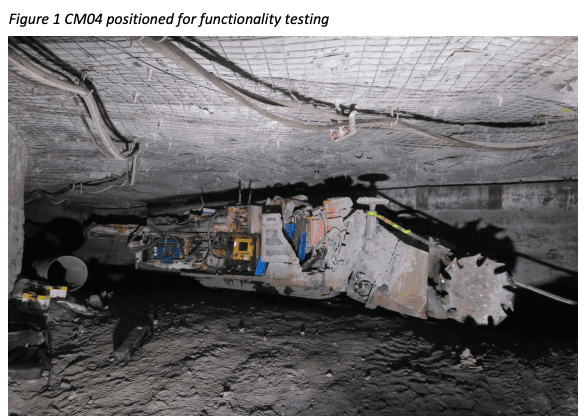 NSW Resources Regulator has published an investigation report into a dangerous incident that occurred at Ashton Coal Mine, Camberwell.

On 30 May 2019, a dangerous incident involving an unplanned movement of a continuous miner occurred within an underground roadway at the Ashton Coal mine (the mine) located in Camberwell near Singleton NSW. Yancoal Mining Services Pty Ltd (mine operator) was the nominated mine operator for the mine having held the nomination since 31 March 2016.

The roadway was under development and was designed to run approximately 205 metres in length with an average upward grade of 1:10. At the time of the incident, approximately 112 metres of the initial first pass mining of the road had been completed with an average overall uphill grade of 1:8. The roadway conditions were generally wet and slippery with varying uphill grades that were in some areas quite steep but did not exceed the continuous miner’s safe operating limits as stated by the original equipment manufacturer (OEM).

During afternoon shift, a deputy, continuous miner driver (CM driver) and a mining technician (cable hand) were operating a Joy 12CM12 continuous miner identified as CM04 to trim a small 10-15 metre section of roadway floor leading up to the face.

While attempting to tram forward and trim the floor, the continuous miner (CM04, miner) lost traction causing it to slide backwards down the sloped roadway. When CM04 first began to slide, the cable hand was standing approximately 10 to 15 metres behind it. The CM driver was operating remotely while positioned on CM04’s right-hand side operator platform with the shift deputy standing next to him.

Once the CM04 began to slide, the CM driver immediately attempted to apply the brakes using the remote, but it had no effect on stopping its movement. The CM driver and deputy then alerted the cable hand to get out of the way. The cable hand slipped and fell to the floor while attempting to turn and run clear of the path of the approaching continuous miner. The CM04 continued to slide down the road with its rear bumper contacting the cable hand before coming to rest after travelling approximately 10 to 15 metres. As a result of the incident, the cable hand suffered psychological trauma and sustained soft tissue injuries to the back of his shoulder, his hand, thumb, chest and legs.

It is recommended that mine operators: