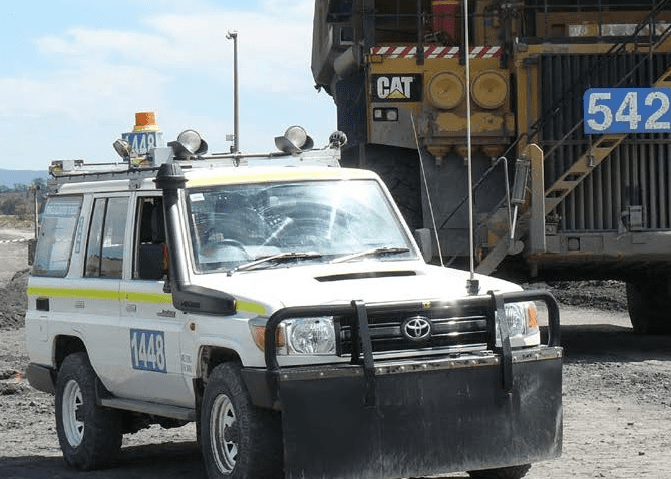 A mine worker has been rushed to hospital this afternoon following a light vehicle crash at the Glencore Itochu Ravensworth mine.

According to reports from NSW Ambulance services, a light vehicle crash occurred at the mine at 1.30 pm. The vehicle had descended over a 15 metre embankment.

The site’s emergency response team treated the mineworker at the scene of the accident prior to arrival of NSW Ambulance Service Paramedics.

The employee was the sole occupant of a light vehicle that drove over an embankment at the mine.

He was treated on site by Ravensworth’s Emergency Response Team and Ambulance paramedics before being taken to Singleton Hospital by Ambulance for further observation.

In 2013 a mineworker was crushed to death in a light vehicle crash at the Ravensworth operation.

Image: For info purposes only – Re-enactment of fatal mine crash at Ravensworth mine ( Not this incident)

UPDATED: 17:26 pm NSW Ambulance say that the mineworker was treated at scene, transferred to Singleton Hospital and the airlifted to JOHN HUNTER HOSPITAL in Newcastle.

STATEMENT FROM THE NSW RESOURCES REGULATOR “The NSW Resources Regulator has been notified of an incident that occurred on 31st January 2020 at Ravensworth Operations near Singleton in NSW. A worker is reported to have suffered suspected spinal injuries after driving a light vehicle over an edge at the mine. The worker sustained injuries to their back and chest and was taken to John Hunter Hospital for treatment. Inspectors from the NSW Resources Regulator were deployed to the site and have begun an investigation into the matter.No further comment can be made while enquiries are ongoing.