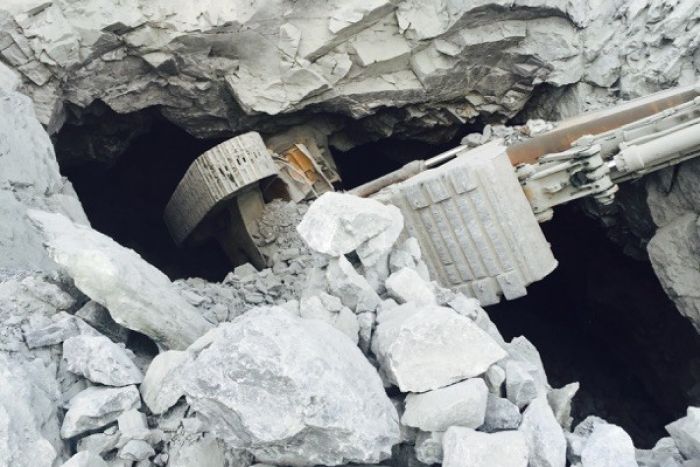 A miner who was effectively buried alive in a 30-tonne excavator as it fell through old workings in 2015 has provided evidence at a hearing at Kalgoorlie Magistrate’s Court.

Bruce Harris, a 53-year-old mine worker was operating the excavator for Hampton Civil and Mining at the Royal Pit near Norseman when it fell through the workings. His injuries included collapsed lungs, crushing injuries to his legs and back. Following the incident, he also suffered severe depression and post-traumatic stress disorder.

In a two day trial that concluded last Friday, the court heard that “it took more than two hours to rescue Mr Harris, who was trapped in the machine and buried by rocks and broken glass from the cab”

The operator was conducting remnant mining at the time of the incident which involved the mining of underground pillars.

According to information published by the ABC Goldfields, Central Norseman admitted it did not develop a void model — a so-called “underground map” — outlining what was not visible from the surface. It also agreed it should have retained a geotechnical engineer and that there was “inadequate” probe-hole drilling to determine if there were voids present.

ABC Goldfields reported that Defence lawyer, Alex Manos, argued Central Norseman provided geological expertise but little else, taking a backseat to Hampton’s operators during the remnant mining phase. His legal arguments centred on interpretations of section 15 of the Mines Safety and Inspections Act, which covered contract work and labour-hire arrangements.

“Central Norseman used their geological expertise to tell Hampton where to dig and where to blast,” Mr Manos said.

“Hampton would then go execute that plan, organise the machinery, workers, conduct all the servicing to make ensure the equipment was working.

“The only way it was profitable for them [Hampton] was if the machinery was working … it was Hampton exerting control over the workers.”

Prosecutor Edward Fearis, from the State Solicitor’s Office, argued Central Norseman would be “slipping through the gap” if it avoided conviction.

“Central Norseman admit everything except whether they are the core employer,” he said.

The Magistrate will hand down a decision on the buried alive in excavator incident on January 31, 2020.