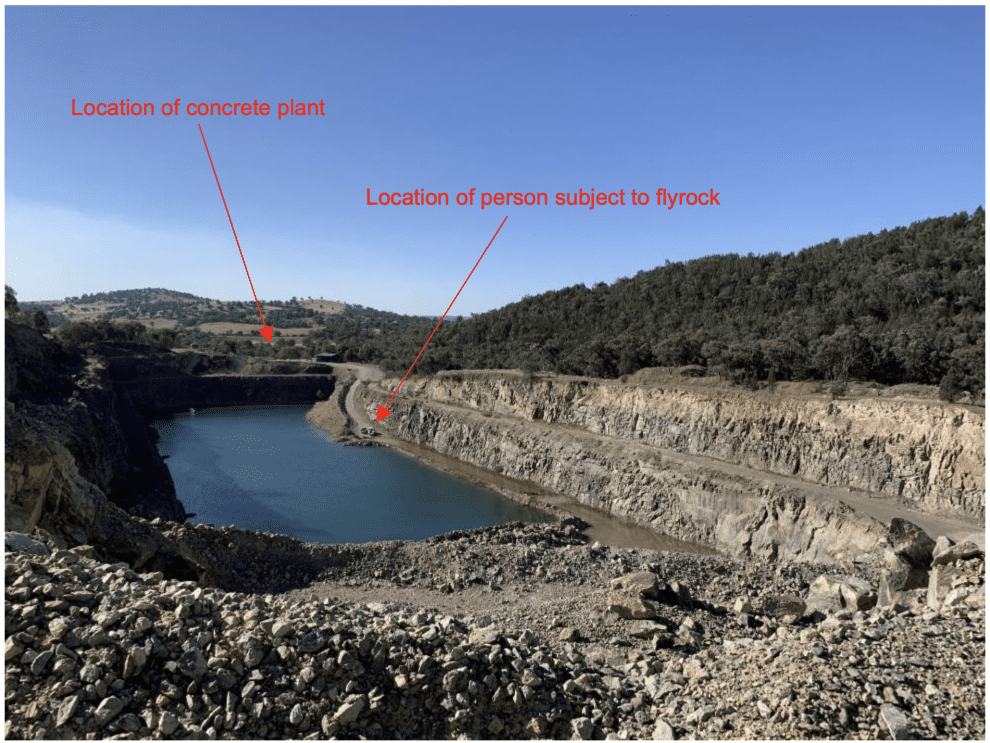 The NSW Resources Regulator has released investigation information regarding a dangerous blasting incident at a hard rock quarry. A worker was inside the exclusion zone when a blast was initiated at the Cootamundra Quarry. The worker did not suffer any physical injury but experienced trauma as a result of being exposed to the blast and flyrock.

The quarry notified the Tegra worker as the concrete plant is within the quarry’s defined blast exclusion zone.

Prior to the scheduled 1pm blast, the Tegra worker left the concrete plant and travelled into Cootamundra. He returned to the concrete plant about 1:30pm and assumed that the blast had been completed as planned at 1pm. Unbeknown to him the blast had been delayed until after 2pm because of issues associated with readying the shot for ignition. The Tegra worker travelled down to a standpipe located at the bottom of a ramp into the water-filled pit to fill the agitator on his truck.

At about 2:15pm, while filling the agitator, the Tegra worker felt a rush of air and sheltered behind the truck for protection as the blast was initiated and flyrock landed around him. When the flyrock stopped falling the worker turned off the pump and drove the truck out of the quarry to the concrete plant and Milbrae office where he reported the incident.

The Tegra worker was approximately 347 metres from the blast when the shot was fired.

The Resources Regulator has commenced an investigation to determine the cause and circumstances of the incident. The investigation will, among other things, consider the systems in place at the quarry to control the risk of people entering the blast exclusion zone, what measures were in fact implemented on the day to control the risk of people entering the exclusion zone, instruction, training and supervision of the workers associated with carrying out the blast on the day, as well as the adequacy of policies and procedures relevant to the incident. The quarry operator is co-operating with the investigation.

The Resources Regulator’s initial inquiries have established that the Tegra worker:

Mine and quarry operators should ensure: