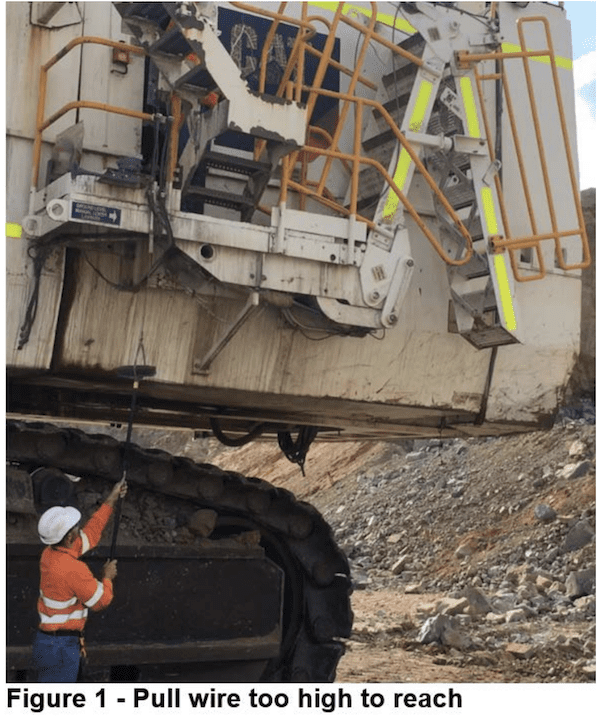 The Queensland Mines Inspectorate in conjunction with mine operators tested the operation of several large excavator emergency access and egress systems. Testing was carried out on a number of Queensland surface coal mines and on a variety of brands which included Caterpillar, Hitachi, Komatsu and Liebherr.

A range of issues were found and are being discussed in this report. Some of the issues also apply to the lowering or lifting of retractable access ladders in a non-emergency mode.

Note that the Coal Mining Safety and Health Regulation – Section 70 requires: ‘A coal mine’s safety and health management system must provide for safe access to, and egress from, fixed and mobile plant used at the mine, including each part of the plant that is routinely accessed.

The issues described in this report have the potential to contribute to the following:

If an operator is incapacitated and in need of help, rescuers may not be able to get on board in a timely fashion to offer assistance e.g if the operator has a heart attack.

The emergency access function was tested through the following scenario:

An operator becomes incapacitated whilst the excavator’s retractable ladder for routine access and egress is in the lifted position. A rescue person is required to get on board from ground level. There is no additional equipment available nor any assistance from the person on board.

The emergency egress function was tested through the following scenario:

An operator is on board whilst the excavator’s retractable ladder for routine access and egress is in the lifted position. This ladder stops functioning i.e. it wouldn’t lower. The operator needs to get off the excavator without assistance from anybody else.

Multiple issues were found that prevented or hindered:

Further details about the issues found with certain brands and models are discussed in the appendix to this report.