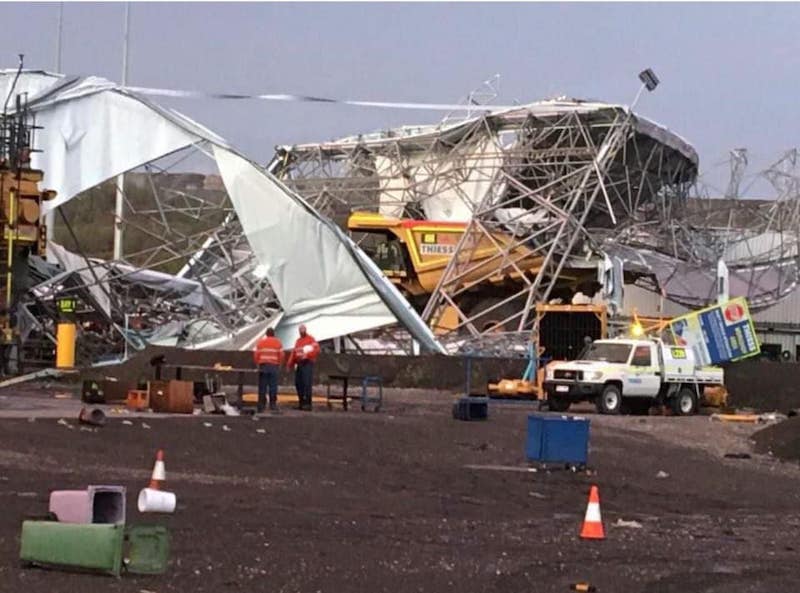 Severe thunderstorms are firing up across Central Queensland with a workshop and another large shed being destroyed at the Peak Downs mine.

BHP Queensland and New South Wales Facebook Page have published a post of Friday stating, “There’s nothing quite like the ferocity of a big storm in Central Queensland. Late yesterday a major storm cell made its way through the Bowen Basin, with our Peak Downs mine lashed with heavy rain and high winds. Most importantly, our site safety systems meant everyone at Peak Downs was prepared in advance.”

BHP has confirmed there is no one injured and operations are ramping back up.

Facebook user Ash Tait said her partner who was on site at the time “literally thought he was going to die”.

“I really feel for these people. Very lucky (no one) was hurt considering it was a PL6 (potential to cause 10 fatalities or more),” she wrote.

“People were inside the offices, out and about etc when the workshop came down on top of/around them.

“Some had to take cover under dump trucks to avoid falling debris.”

The CFMEU’s Stephen Smyth told the ABC that the incident demonstrated the need for companies to reassess the way buildings and structures were rated for safety and wind speeds.

“The only shining light out of this was no-one was injured, which is great,” Mr Smythe said.

“Our safety reps were out there yesterday having a look around, but certainly there’s going to have to be a rethink not just of Peak Downs but across the industry with storm season on the way.”

Mr Smythe told the ABC that mining companies and their contractors were erecting flimsy structures, akin to what someone would build in their backyard — but on a much larger scale.

“Companies and contractors have gone and put these in place as a stop-gap measure but, as with anything, they end up staying there as a full-time structure for trucks and people to work in and under,” he said.