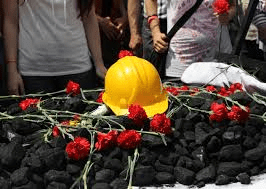 Last week, Turkey’s Parliament finally approved the ILO Convention 176 on safety and health in mines after a year that saw over 300 Turkish mine workers perish in preventable mine disasters.

Global union IndustriALL, along with union representatives from around the world, including Australia’s CFMEU, conducted a solidarity mission to Soma one month after a devastating mine disaster in Soma saw 301 mine workers perish in May of this year.

In a statement released today IndustriALL said, “That delegation committed to escalate the campaign for C176 ratification in Turkey, determined to honour the miners’ deaths.”

The accident at Soma was followed by 18 more deaths at the Has Sekerler coalmine near Ermenek in October. IndustriALL reacted to that accident by writing individually to all 535 members of the Turkish Parliament on 29-30 October, demanding C176 ratification.

As well as a number of vital practical stipulations including guidelines on inspections, accident reporting and investigation, training, hazard control and workers’ rights to remove themselves from danger, C176 demands worker involvement in safety and health decision-making.

Convention 176 makes the fundamental recognition that “workers have a right to genuine consultation on and participation in the preparation and implementation of safety and health measures concerning the hazards and risks they face in the mining industry.”

IndustriALL Global Union Assistant General Secretary Kemal Özkan marked the important victory but insists the campaign for mine safety in Turkey is far from over:

“Turkey’s ratification of ILO Convention 176 is the first step towards fixing a broken business model that kills mineworkers for private profit. Now that we have ratification, our efforts will turn towards ensuring implementation of this important convention so that Turkey’s mining industry is brought in line with the international standard. We fundamentally believe that the stronger the union, the safer the mine, and we will always demand mine owners’ respect for their union partners.”

In September the Turkish Parliament passed a bill that brings some new rights for miners on working hours, severance payments, retirement age, and wages. However, many employers have been transferring the cost of these changes onto workers.