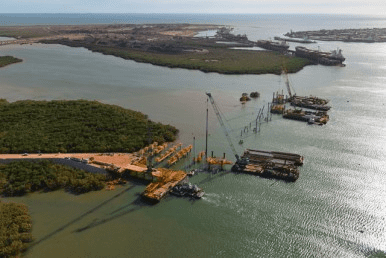 The incident happened just before midday yesterday when the two men were moving equipment aboard the Norwegian ship, Happy Buccaneer, according to The West Australian.

Both men were taken to the Hedland Health Campus with leg injuries.

Officers from the Australian Maritime Safety Authority have begun investigations into the cause of the accident.

The crane accident is the latest in a series of safety breaches in and around Gina Rinehart’s Roy Hill mine project in Western Australia.

In January two prohibition safety notices were issued to Roy Hill mine project operators by the Department of Mines and Petroleum (DMP) after concerns were raised over the unsafe operation of cranes and elevated working platforms at the site.

In November of last year, safety inspectors for the DMP claimed they were “laughed at by Roy Hill mine project workers” after raising safety concerns during an audit.

The audit documents, obtained by the ABC under freedom of information laws, say that DMP inspectors found “clear breaches of safe work practice requirements” during their April visit to the mine.

Speaking to the ABC yesterday, the North West organiser of the Maritime Union of Australia, Kyle McGinn, said there had been too many incidents of this kind in the Pilbara in recent months.

“As far as I’m aware, there’s been a serious incident onboard a foreign-manned vessel that was alongside the Roy Hill wharf,” he said.

“This is again another foreign labor incident in the Pilbara.

“There have multiple incidents over the last 12 months involving foreign seafarers.

“Hopefully these men are covered under the ITF (International Bargaining Forum) agreement, which gives them some workers rights and they can be covered into their recovery.

“Any incident onboard a vessel involving machinery of this sort generally ends in either a serious incident or a fatality.”

A spokeswoman for Roy Hill mine, operators of the wharf, told  The West Australian that the company’s emergency response team was quick to respond to the incident.

“We received a request for assistance and our team immediately responded to the incident, providing medical treatment to the injured people before they were transported to Port Hedland hospital for treatment.

“Our thoughts are with the injured people, their families and work colleagues,” the spokeswoman said.

New Codes Of Practice for NSW Mining Sector
Compliant State: Is there a link between FIFO and suicide
Comment