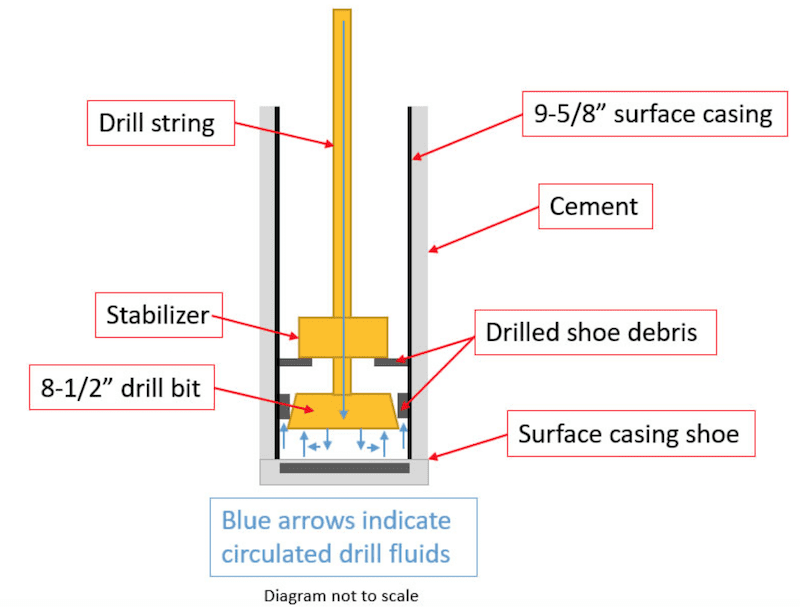 The Queensland Department of Natural Resources, Mines and Energy have issued an alert to advise of incidents concerning drill strings where the drilled surface casing plug lodged between the drill string and the casing resulting pressure build up and uncontrolled upward movement of the drill string.

Two similar incidents have occurred on separate drill rigs in separate operations within a 12 month period. In both cases, while the rig was drilling out the surface casing shoe, the drill string was lifted out of the hole causing significant damage to the rig with the potential for serious injury or a fatality.
The first incident occurred in March 2018.  The rig was drilling out the 9-5/8” surface casing shoe that had been set at approximately 103m.  The stand pipe pressure increased to ~1,200psi (typically ~750psi) in under three seconds which resulted in the drill string moving upwards. The Top Drive System travelled 3.5m before contacting the floating crown, coming to rest and causing damage to the rig. The second incident occurred in January 2019.

Immediately following a formation integrity test, the rig was drilling out the 9-5/8” surface casing shoe that had been set at approximately 30m. After drilling out the plug the standpipe pressure increased to 768psi (typically ~360psi) and the drill string began to move upwards out of the hole. The string moved out of the hole about 3m at which time the pumps were shut in. The drill string then dropped back down causing the drill line to part and the crown saver block to fall approximately 20m and damage the drill rig floor. All personnel had evacuated the area as the emergency horn had been sounded upon the string moving out of the hole.

Both incidents appear to be caused by the drilled surface casing plug lodging between the drill string and the 9-5/8” casing, blocking the tight clearance.  This prevented drill fluids from circulating and caused an increase in the circulating pressure.  This resulted in hydraulic pressure forcing the drill string to be lifted out of the hole.  This is illustrated in the figure below.  In one instance it was thought the debris was caught around the drill bit while in the other instance it was thought the debris was caught underneath the stabilizer.

The key issues identified were:

The recommendations from the incident investigations were:

Code of practice for the construction and abandonment of coal seam gas and petroleum wells, and associated bores in Queensland, Version 1, 1 September 2018