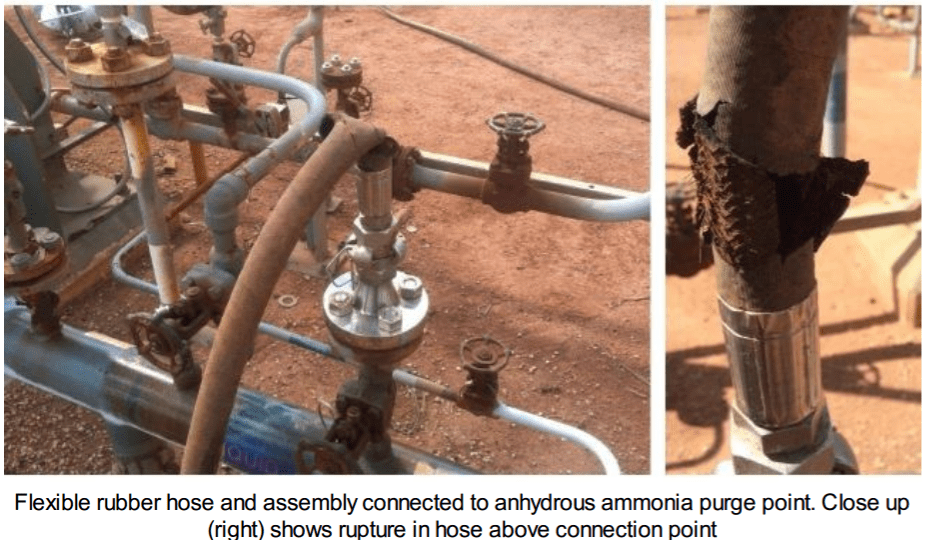 A worker was seriously injured when he was sprayed by anhydrous ammonia after failure of flexible rubber hose, according to a significant incident report released by the Department of Mines and Petroleum.

The report said a process worker and a colleague were preparing for a scheduled maintenance task in the ammonia storage area of a processing plant, and as part of a routine purging operation, the process worker connected a flexible rubber hose via a coupling to a purge connection point.

“The purge hose was charged with nitrogen and the valve was being opened slowly, allowing nitrogen to flow into the system, when the hose ruptured above the connection point,” the report said.

“The worker was exposed below the waist to pressurised anhydrous ammonia at about -33°C, and was enveloped in the ensuing ammonia cloud. His colleague was able to get the worker to a nearby safety shower before contacting the site’s emergency services.”

The worker was air lifted to a city hospital and treated for serious chemical burns. The DMP are still investigating the incident.

The report outlined direct causes to be the purge hose failing as the valve was opened and the worker being next to the hose when it failed. Contributory causes included the hose appearing to not be in a “serviceable condition” and flexible hose safety procedures past their review date or under review.

The following actions were required:

As part of an operation’s safety management system, responsible persons are reminded of the importance of monitoring and reviewing the safety and integrity of equipment over its life. Some
recommendations are listed below for flexible hoses.

When selecting flexible hoses, consider their specific application and whether they comply with the appropriate Australian standard.

Implement a management system that defines:
– an appropriate inspection, testing and maintenance regime, based on a risk assessment, manufacturer specifications, supplier recommendations and applicable Australian standards
and previous experience
– how each hose type will be inspected and tested (e.g. competent person using appropriate testing equipment), and marked or tagged accordingly
– how each hose type will be stored, based on manufacturer recommendations.

Implement a training program so that workers understand:
– the risks associated with using flexible rubber hoses under pressure
– how to do a pre-task inspection on a flexible hose to confirm that it is fit for purpose before being used
– the actions to take when a hose is found not to meet the requisite standards for the task.

Note: Workers are not in a position to identify internal degradation of the hose, hence the need for periodic testing by a competent person.

Hoses deemed to be at the end of their life should be rendered unserviceable and discarded to prevent further use.