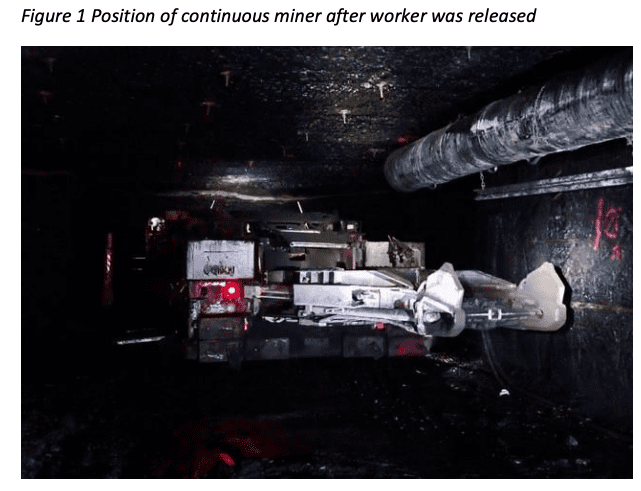 The NSW Resources Regulator has published an investigation information release concerning injuries sustained by a worker when he was pinned by the boom of a continuous miner at Myuna Colliery underground coal mine, Lake Macquarie, on 5 February 2021.

Contract maintainer pinned under a cab

According to the report, the incident occurred in the mine’s 9 East Panel in Heading 5 outbye of cut-through 93. Three of the night-shift mineworkers were tasked with continuing first workings and forming the intersection in the heading. The workers commenced cutting coal at about 11:15 pm. The injured worker and another worker initially operated shuttle cars while the third worker operated continuous miner (the miner).

At some point the injured worker left the platform of the miner. It had been identified that the left-side bolt storage cassette on the miner was empty and needed replacing. The miner concluded its bolting cycle and prepared to tram outbye. Its boom was angled toward the right rib at an angle of 21 degrees (relative to the continuous miner body) and remained in this position throughout the incident.

The miner operator trammed the miner towards the centre of the heading using backward and forward movements.

The miner slewed to the left which caused the boom of the miner to move in a sideways direction towards the injured worker who was standing next to the right rib.

The injured worker became pinned between the right-side of the boom and the rib. The miner operator heard the injured worker’s screams and slewed the miner away from the rib thereby releasing the worker.

An emergency response was activated. The worker was transported to the hospital where he underwent surgery. The worker sustained serious internal injuries to his kidneys and lungs. He also suffered serious arm fractures and multiple rib fractures.

The Regulator’s initial inquiries have indicated that: