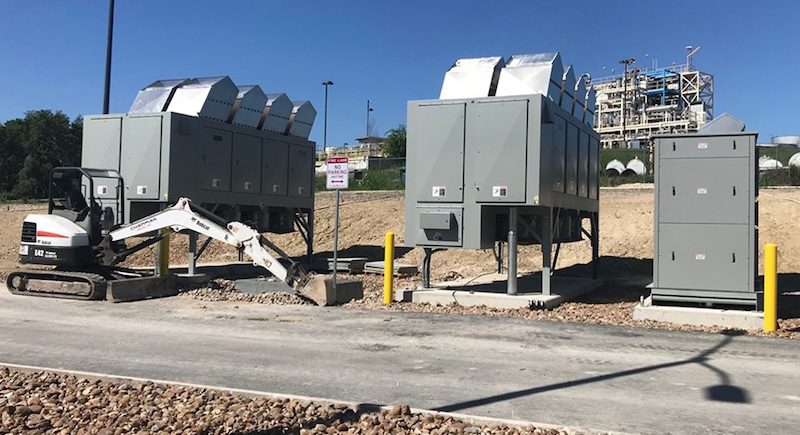 Constructed by the Gas Technologies Institute (GTI), General Electric and other industry partners in the United States, Australia’s national science agency, CSIRO, is part of the program to explore the use of sCO2 powerplants.

The 10 megawatt-electric sCO2 pilot plant, currently being constructed in Texas, will demonstrate a fully integrated power cycle that can be easily configured to operation on renewable energy. When completed in June 2021, it will be the largest sCO2 powerplant demonstration facility of its kind in the world and will represent a significant step toward sCO2 technology commercialisation.

While most powerplants use steam turbines to produce electricity, sCO2 powerplants use high temperature CO2 instead. By avoiding the use of water, advanced sCO2 power plants using renewable energy inputs have significant potential to transition mining operations to a low emission future.

The advantage is that sCO2 is a higher density working fluid, which means sCO2 power plants can be smaller, more efficient and not reliant on water for steam and cooling. sCO2 powerplants can also be autonomous and operate using a wide range of heat sources.

This makes such powerplants an ideal candidate to replace diesel generation in off-grid mining operations, as renewable energy can be used to power their operations for longer periods of time.

Many mining companies are committed to transitioning to low emissions technologies. Widespread implementation of sCO2 power generation technologies could be a game changer for the mining industry globally and help accelerate the world’s transition to a low carbon future.

CSIRO’s partnership in the Gas Technologies Institute Program will improve understanding of how sCO2 powerplants can enable lower and zero emission technology solutions, and how they might be used in remote off-grid mining and community locations as a low-cost alternative to diesel fuel power generation.

For CSIRO, the use of concentrated solar thermal (CST) technologies to provide the renewable energy solution for these sCO2power plants is also a focus. CST technologies capture and store heat, which make it an ideal solution for a sCO2 powerplant. The Australian Solar Thermal Research Institute (ASTRI), which is managed by CSIRO, is leading efforts in this area.

For mining operations, the use of portable, scalable and low-cost Thermal Energy Storage (TES) will be a critical enabler for sCO2 power plants. TES can be used to store heat, which can then be used day or night to run a sCO2 power plant.

The addition of TES can make 24/7 renewable mining operations a reality. Australia’s TES efforts under the GTI Program will be delivered in partnership with Graphite Energy, and has the potential to create new market and job opportunities.

“In a low carbon world, there is an opportunity to perform more on-shore processing and replace traditional fossil fuel energy sources with renewable energy resources in the commodity value chain. The use of sCO2 powerplants operating on renewable energy could make this opportunity a reality.”

This research is part of the Joint Industry Partnership (JIP) of the Supercritical Transformational Electric Power (STEP) project known as STEP Demo.

The construction of the STEP Project demonstration plant is nearing completion, with equipment installation underway in San Antonio Texas. It is expected to be operational in mid-2021.

The site will be able to demonstrate performance over a range of operating conditions and allows flexibility to be reconfigured to accommodate ongoing testing and technology optimisation.

This project is an exciting step in renewable energy innovation to help meet the world’s future carbon needs while reducing costs and providing cleaner sources of electricity.

Austin Powder launches new connectors for E*STAR electronic detonators
Fire System Maintenance – Did I get what I paid for?
Comment