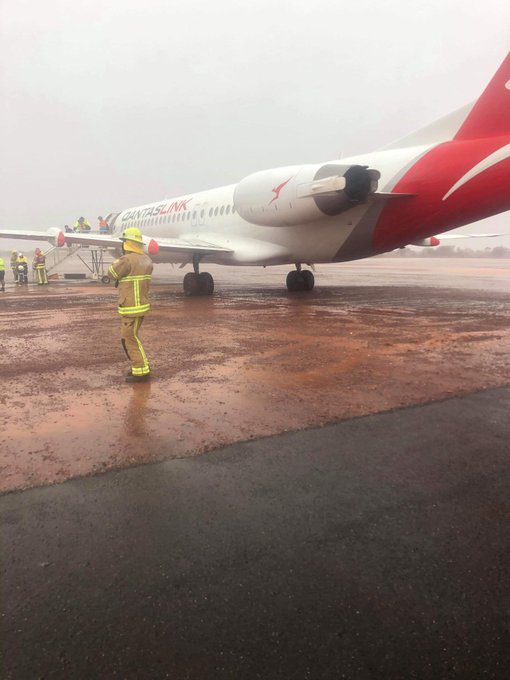 While it sounds like an episode of Mining Boom, the incident was real and reportedly scared the wits out of a few miners on their way into Newman yesterday. The technical term used by investigators is a ‘runway excursion.‘ But it’s an excursion that the FIFO mineworkers would have rather not have had and, ultimately should not have to face as part of their job.

Qantas Link QF2650 left Perth at 5.37 am and arrived at Newman at around 7.23 am yesterday in the midst of bad weather from Cyclone Blake. The problem was there was just a wee bit of rain and wind on arrival in Newman.

The ATSB has confirmed it is “investigating a runway overrun involving Fokker F100, VH-NHY, at Newman Airport, Western Australia, on 9 January 2020.”

The ATSB said that “During landing, the aircraft overran the runway, stopping approximately 100 metres beyond the runway threshold. There were no injuries to crew or passengers.”

It said, “The evidence collection phase of the investigation will include reviewing flight data, interviewing the flight crew, reviewing operational information and examining the runway conditions at the time.”

A Qantas spokesperson confirmed “The aircraft has come to a complete stop in what’s called the runway end safety area.

Flights in and out of Newman yesterday were canceled while the aircraft was removed and checked by maintenance engineers.

Qantaslink confirmed “We have commenced an internal investigation to determine how this occurred and have reported the incident to the ATSB.

We apologise to impacted customers and are working to re-accommodate them as quickly as possible.”

According to records, It’s not the first time that the same aircraft has been involved in an incident. In 2016 a low hydraulic pressure and smoke and fumes in the cabin resulted in the aircraft being evacuated on arrival at the end of the taxiway in Perth.

Additionally, there have been a range of incidents involving Fokker F100 operations across a range of carriers including an engine failure in July 2019 (Geraldton to Perth) (VH-FWI), a loss of cabin pressure in June 2016 on a flight from Christmas Creek to Perth (VH-NHF), and engine failure in July 2018 (VH-UQC) from Brisbane to Mount Isa, a fuel-related emergency in June 2015 from West Angelas to Perth. There also have been several bird strike incidents at Australian airports over several years.

The Fokker F100 aircraft has been a staple for mining FIFO transport operations in Australia with QantasLink, Virgin and Alliance Airlines all operating aging fleets. QantasLink operates 17 Fokker 100s through its’ Perth-based Network Aviation subsidiary.

The first Fokker F100 aircraft was produced in 1986 and the global production of the aircraft ceased in 1997.

While AMSJ understands that tens of thousands of hours are flown by mining personnel across the country each year without incident, the outcomes of an aircraft crash are seldom favorable. In any risk matrix, the consequence of the loss of a planeload of miners in an aircraft incident would be a highly catastrophic event and one that demands an appropriate response from the industry.

Recognising that risks with aircraft operations in mining exist should form part of an effective corporate safety plan. Just because it’s off-site, provided by an airline contractor or under the jurisdiction of the ATSB doesn’t mean it can’t affect mining operational performance.

It has in the past..and if not managed effectively, aircraft safety may haunt the mining industry again.