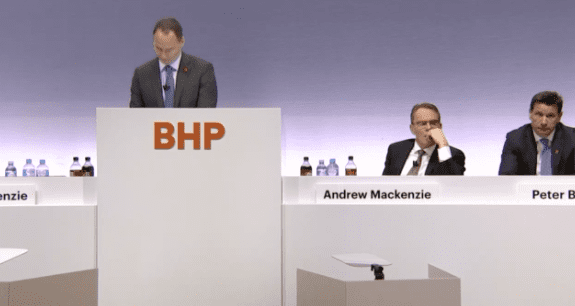 BHP executives have sought to defend its’ move to the BHP Operational Services model at the company’s AGM in Sydney this morning after unionists criticised high turnover rates and conditions. BHP says that “Operational Services offers better stability and safety of the workforce”

Jeff Drayton, District Vice President, from the CFMEU NSW Mining Division raised concerns of high turnover at some BHP sites quoting that one site in Hunter Valley turnover rates were as high as 50%.

Drayton asked BHP Executives at the meeting “What do you think happens to the reputation of BHP in the communities in which it operates when it cuts pay it cuts paying its’ workers by 30% through the highly artificial devices of a subsidiary?”

Drayton also questioned the production cuts that have been happening in both Queensland and New South Wales coal mines as shown in the company’s last quarterly production report.

Drayton asked BHP Executive at the meeting “Do you think that some of it (loss of production) might be related to the high labour turnover in the workforce resulting from labour-hire and the operation services model. Don’t shareholders here today deserve to know that the loss of permanent jobs held by experienced workers not only hurting those people but also affecting the production prospects of the company?”

But BHP’s McKenzie hit back at the CFMEU, defending their position seeking to highlight both the popularity of the BHP Operational Services Model with employees and the benefits that he says are being given to workers.

He told the meeting that 1000 people had been provided employment through the new model and that the model offered better conditions than casual employment models of labour-hire. But later added that company had 23000 application for 1000 jobs.

“And from a market competitive package perspective, the salary for operation services is typically in the range of $120K to $150K a year and in addition their annual performance benefits that reward employees if the company does well” MacKenzie added.

“Leave personal leave parental leave and the like gives operation services employees, who may formerly have been contractors, a sense of stability and security that they simply don’t get in labour-hire and casual jobs”

In part of McKenzie’s rebuff to the CFMEU, he justified the benefits of new apprenticeships and traineeships to the industry.

“We can have up to 1000 new apprenticeships and traineeships annually and we think this will give BHP the skills needed to achieve great performance. So it’s aligned with our intent to not materially increase the proportion of casual but of direct employment and, to answer your question, it is a great example, we believe, of the positive and respect between social value and shareholder value” McKenzie said.

McKenzie said that BHP employees, as a consequence of the move to operational services, many employees now received holiday pay and sick pay and “they’re able to receive a lot more training and skills”

McKenzie said that he was a former trade unionists and he believed that the CFMEU should be “standing for better security of work in this environment” saying that this is what BHP Operations Services is doing. He said, “it (Operational Services) is a service to working Australians in raising standards across the coalfields.”

Muswellbrook Mayor Martin Rush said that he was also concerned with the BHP operational services model.

“I have to say that it is caused enormous division in my community and I also have to say, that only as recently as yesterday, I saw a contract well south of the $120K – $150 dollars that was referred to earlier. And the people that I personally know who are working for operational services weren’t previously employed as contractors” Mayor Rush said.

CFMEU says model does not provide equity of employment

Peak Downs Lodge Secretary Scott Leggett said in a Facebook post this morning that people doing the jobs beside him were being treated vastly different than what he is and earning up to $30K – $40K less for the same job. People are being told that they’ll only be getting on in six or seven years off for Christmas.

Watch what Scott Legget said below