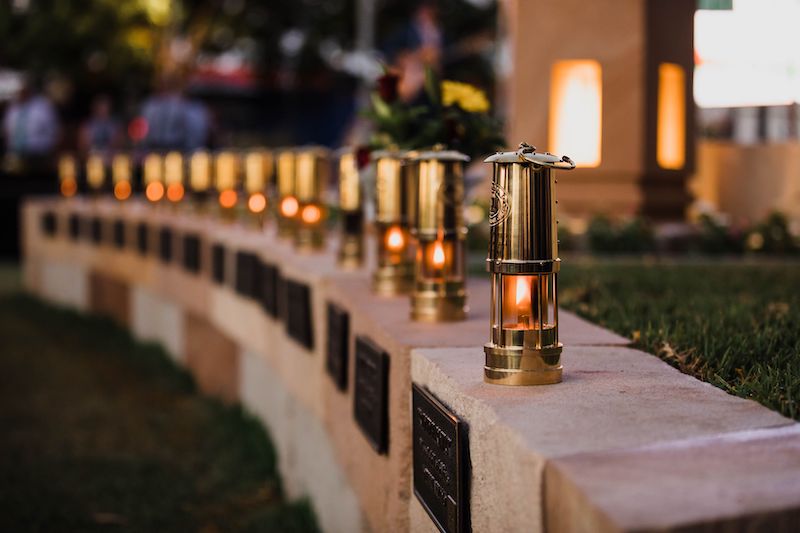 The Moranbah Miner’s memorial has been officially opened last Friday by a range of dignatories and mineworkers from across the Isaac region. The memorial pays tribute to the thirteen miner’s who have died in tragic mining accidents since mining began in the region.

The memorial features a bronze casting of a miner in contemplation over his lost mates. The miner looks towards a central sandstone plinth that will cast an eternal light over the plaques naming those who have lost their lives while working in the Moranbah coalfields.

Mayor Baker from Isaac Regional Council said the memorial unveiling and service on Friday, 8 November 2019, gave her a huge sense of Isaac pride.

“We remember the human cost to an industry that is in our DNA,” Mayor Baker said.

“We know how much a fatality resonates in each and every member of our community.

“This is thanks to an overwhelming amount of blood, sweat and tears to ensure we have a fitting reminder of those we’ve lost on the job.

“To the families and friends of our miners who have passed, this is your peaceful place for us all to come together and reflect.

“The lives we’ve lost in the Moranbah mines and those we’ve lost on the roads to and from work, in work camps and from coal-related diseases, these men were fathers, sons husbands, brothers, uncles and nephews and as a community, we stand with you.”

How many miners lives are remembered in the Moranbah Miners Memorial?

What are the names of the miners who are included in the Moranbah Miners Memorial?

Where is the Moranbah Miners Memorial Located?