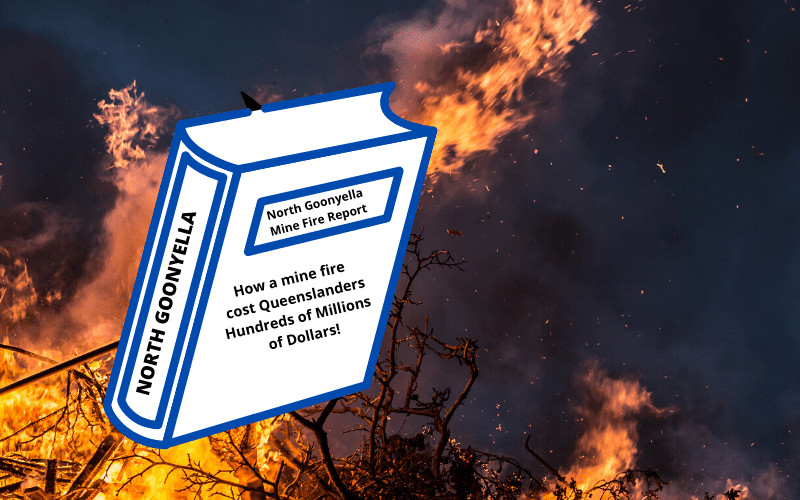 A Queensland Government report into the cause of the North Goonyella mine fire has not been completed despite the incident now likely to have cost the State of Queensland tens of millions of coal royalties at a time when the Government coffers are bleeding dry.

In October 2018, Queensland Mines Minister pledged to assemble an expert team to investigate the mine fire and identify contributing factors. Minister Lynham told the Mackay Daily Mercury in October 2018, “The investigation will commence once the situation is safely brought under control, this is to ensure attention is not diverted from the regulator’s priority: the safety of workers.”

But AMSJ has learned that the investigation has still not been completed into the tragic event which ended in hundreds of workers and contractors losing their jobs at the mine, environmental license conditions being breached and the State of Queensland forfeiting tens of millions in royalties from the once productive mine.

At the time of the event and for several months following, workers told AMSJ that they believed the action of Government mines inspectors contributed to the burning of the mine through the provision of advice to the mine owner, Peabody Energy.

On the surface at least, Queensland Mines Minister Anthony Lynham appears to have contributed to the debacle by not compelling witnesses to provide evidence to investigators through his failure to use powers under Part 12 of the Coal Mining Safety and Health Act to conduct a board of inquiry into the ill-fated incident.

North Goonyella mine fire | like peeling an onion for information

As the pages of the event are peeled back, AMSJ has also learned that the Queensland Government’s Safety In Mines Testing & Research Station (Simtars) provided advice and gas monitoring services to Peabody Energy throughout the event. Hundreds of pages of information and reports were provided to Peabody Energy by the Government’s own mine fire service provider – Simtars.

The Queensland Government conveniently charged out at fee-for-service rates to Peabody Energy….we are led to believe this amount to be in the hundreds of thousands of dollars.

Peabody Energy of course reportedly claimed costs of $125M from insurers for the event which presumable included many of the costs of mitigation including fees paid to the Queensland Government for consultancy services.

Is there a good reason to provide a report?

Apart from the fact that the Queensland Government, the people of Queensland and those reliant on the Peabody mine for their livelihoods have lost substantial revenues from the closure of the mine, there is one critical reason. Maintaining the integrity and transparency of Government mine safety regulation.

A cloud overhangs one of the biggest debacles in mine safety management in recent times. The cloud must be lifted on the perpetrators of this event…they simply can’t be allowed to walk away scot-free for an event that has cost so many so much. But more importantly, the cloud must be lifted such that events of this ilk are prevented from occurring in the future.

Whether they be within Peabody, the Department of Naturals Resources and Mines, or at Ministerial level, the public deserves a right to know why people within a system permitted this to happen in modern-day mining.

Where are we at?

In July 2019 the Queensland Government’s Department of Natural Resources and Mines – Queensland Mines Inspectorate said that the Inspectorate “continued to provide advice to Peabody’s North Goonyella mine personnel, to ensure that the level of risk to the safety and health of coal mine workers is at an acceptable level. This extends to having inspectors onsite since the spontaneous combustion event in September last year and throughout the more recent process of reviewing the operator’s risk management activities ahead of mine re-entry.”

“The Mines Inspectorate team will also re-enter the mine as part of our ongoing investigation to gather further information into the spontaneous combustion event,” the Media release said.

“At this time, persons of interest have exercised their right under the Coal Mining Safety and Health Act 1999 not to be interviewed by the inspectorate unless compelled by law to do so. As such, no interviews have been conducted yet.”

Now we sit bewildered as to why an inquiry into an explosion of the Moura coal mine took around six months but, a report into a mine fire potentially resulting from a spontaneous combustion event hasn’t been finished almost 19 months on.