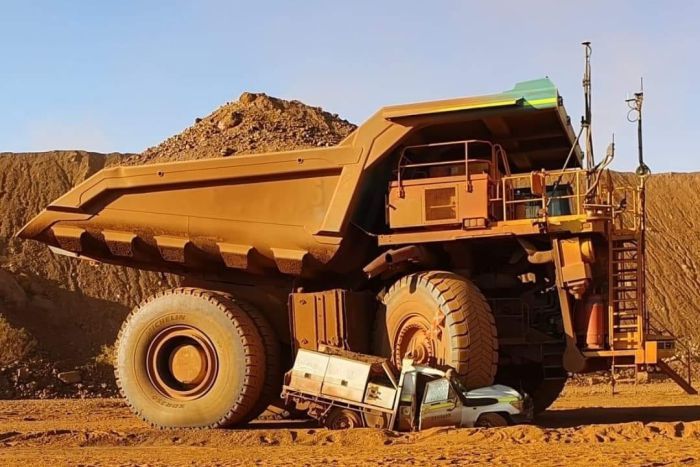 A mining accident investigation is underway at the Brockman 4 iron ore mine in the Pilbara after an autonomous haul truck ran over a light vehicle during a maintenance activity.

Reports say that an electrical maintainer of an autonomous haul truck was working on a stationary loaded haul truck when it inadvertently moved and crushed the light vehicle parked beside the truck. The movement of the haul truck is believed not to have been caused by the autonomous or remote operation.

No one was injured in the incident but a light service vehicle was destroyed.

Rio Tinto has confirmed no one was injured in the incident. In a statement, it said that it is “investigating the incident and that safety is the company’s “top priority”.

“The ongoing internal investigation will seek to identify measures to ensure such incidents are avoided in the future.”

The statement confirmed that the haul truck involved in the incident had been retrofitted with autonomous technology however it was operating in manual mode at the time of the incident and was outside the autonomous vehicle zone.

The WA Mining Safety regulator has attended the incident scene. “DMIRS officers have attended the scene and are making enquiries,” Director of Mine Safety Andrew Chaplyn said.

A range of key mining safety issues associated with the incident have been identified including:

The incident comes as BHP plans to roll out the automation of the Goonyella Riverside mine and sack 340 workers.

According to AMSJ records, a similar mining incident occurred at the Poitrel mine and a previous incident at the Brockman 4 mine in 2015 when the Regulator highlighted the importance of the vehicle segregation. Read more light vehicle incidents at mines

Mineworkers have highlighted the potential dangers of the incident. One former mine worker told AMSJ “It could have been a lot worse if another worker had been waiting inside the light vehicle”