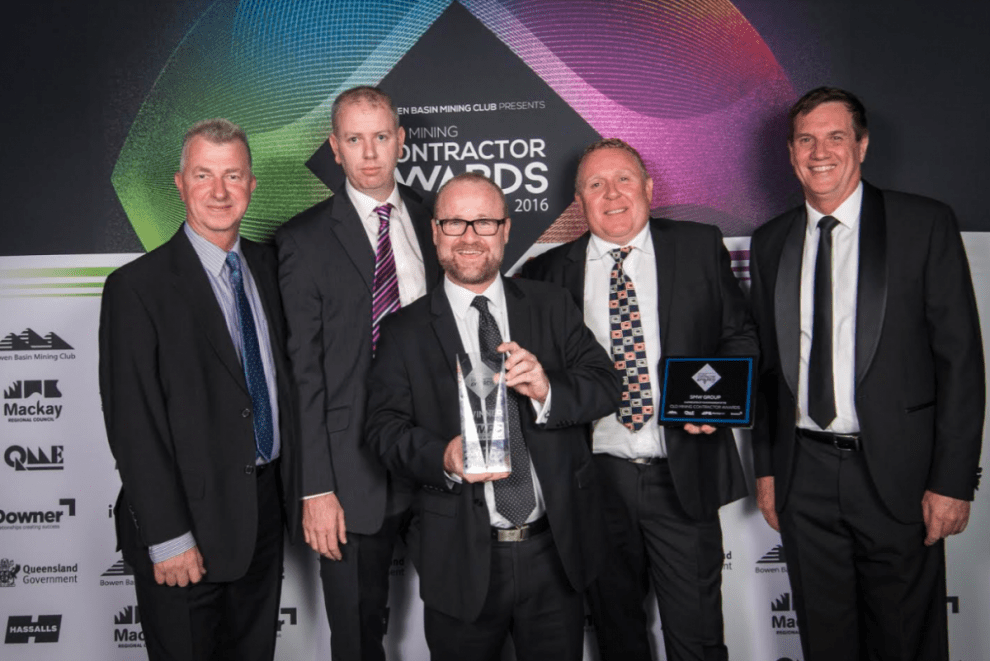 An innovative App developed by a Queensland construction company to gauge the mental health and wellbeing of its 900 FIFO workers, has been recognised by the industry at the 2016 Queensland Mining Contractors Awards.

The MPC Group was announced the winner of the `Staff Engagement Category’ at the Awards, which were held in Mackay  last month as part of the Queensland Mining Expo.

Award judges were impressed with the App’s ability to survey the company’s entire FIFO workforce each swing to ascertain their overall wellbeing, and enabling the company to take affirmative action or provide counselling help to workers if needed.

The easy-to-use App, called Mate Check, takes two minutes to complete during flights in and out of project sites, and through the simple click of a button, workers can confidentially access counselling assistance from recognised organisations – such as Mates in Construction, Beyond Blue and Lifeline.

Accepting the award, MPC Group Social Performance Manager Glenn Pfluger, said the company’s Mate Check App had been in use since 2015 and had been overwhelmingly welcomed by the company’s workforce.

“Our crews have totally embraced this new App technology and through it have given us valuable mental health feedback and also thousands of suggestions on ways the company can improve worker wellbeing on site, in camp and even at home,” Mr Pfluger said.

“To win this award is absolutely fantastic, it’s a real honour to be recognised by the industry, and particularly so for work that is being done in industry mental health which, up until recent times, probably did not receive the focus it deserved.

“While I thank the QMCA for the win and the industry for its recognition, I think the real thanks must go to our crews who for the past two years have actively, and at times very honestly, opened up when using the Mate Check mental health survey each swing.

“It’s thanks to this honest and genuine feedback about their own mental health, that we are now getting a much clearer picture of how they are feeling, but most importantly, being able to implement strategies to improve their wellbeing.”

Mr Pfluger said while having an in-depth insight into your workforces’ wellbeing through the Mate Check App was a tremendous outcome, the fact that more than 60 of the company’s employees had sought counselling assistance using the App over the past two years, was quite sobering.

“It’s very sad to think that number of our people needed to seek help over the past two years, but I am bouyed by the fact that we have put something in place for them to easily access help when needed, rather than leaving them feeling like they have to work through it in isolation,” he said.

“It’s a telling sign of the impact of mental stress on workers, particularly those on FIFO rosters, and I believe indicative that no part of our industry is immune to this health issue.”