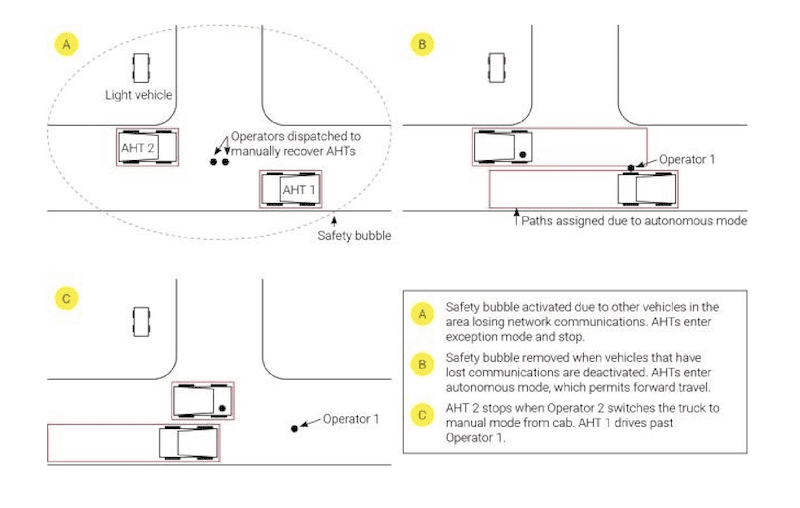 Government of Western Australia, Department of Mines, Industry Regulation and safety released an incident report. According to the Regulator, two operators were exposed to potentially serious injury when the two autonomous haul trucks (AHTs) they were attempting to board unexpectedly drove forward.

The failure of a communications trailer providing wireless coverage for the autonomous haulage system (AHS) caused a reduction in network coverage. As a result, the two AHTs came to a stop as per protocol for loss of communications. The operators were dispatched to recover them manually.

While the operators were near the trucks and moving to board, the last vehicle that had lost communications was deactivated, removing the safety bubble holding the AHTs, which were in exception mode. The AHTs reverted to their last command and resumed autonomous operation, activating two blasts of the horn to signal commencement of forward movement.

On hearing the warning, the operators took evasive action, with one entering the AHT cab and taking control, while the other moved out of the path of the second AHT as it drove past.

It was later determined that the two AHTs had not lost communication, but had stopped due to other vehicles nearby losing communications.

The direct causes of the incident were: operators attempted to board the AHTs while they were not under their control. The operators did not identify that the AHTs were in exception mode when attempting to board.Once the light vehicles in the area were deactivated, which removed the projected safety bubble, the AHTs reverted from exception to autonomous mode allowing them to resume operations.

The contributory causes have been identified, including:

AHTs were in exception mode and not suspended (unsafe mode to approach).

Lack of understanding or clarity regarding the actions of the AHTs in various modes of operation.

Limited redundancy in communications network utilised by the AHS.

Ability for personnel to override system functions that are designed as critical safety controls.

Operators did not observe the AHTs status mode indicator lights.

Previous AHS communication issues may have desensitised the operators to potential hazards.

AHTs did not detect a person about to board.