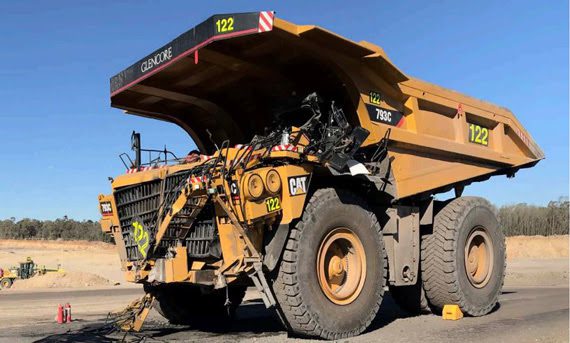 A worker suffered serious leg injuries during a nose-to-tail collision between two rear dump haul trucks. The injured worker was transported to hospital for treatment. The NSW Resources Regulator has commenced an investigation into the incident.

The mine
Bulga Coal Management Pty Limited is the mine operator of the Bulga Surface Operations. The mine is part of Glencore Bulga Coal and is on Broke Road near the rural villages of Bulga and Broke. Bulga Coal is 15 kilometres southwest of Singleton, NSW.

Bulga Coal comprises of an open cut and coal handling preparation plant. The open cut is a truck and shovel operation that produces semi soft coking coal and thermal coal for export. The open cut has a fleet of about 50 haul trucks.

The incident
At 3.45 am on 23 July 2018, a labour-hire worker, aged 28, was operating an unladen haul truck at Bulga Surface Operations. The worker drove along a haul road toward a second 223-tonne rear dump truck that was stopped on the haul road to give way to other vehicles entering the haul road. The worker failed to stop, which caused a nose-to-rear collision with the second unladen haul truck. The front of the worker’s haul truck impacted with the rear edge of the tray of the second truck, crushing the operator’s cabin and trapping the worker inside.

The mine’s rescue team released the worker from the crushed cabin. The worker was transported to hospital where he underwent medical treatment.

The worker suffered multiple fractures to his right leg and a small laceration to the face. The worker operating the second dump truck was uninjured.

The investigation
Resources Regulator inspectors and investigators responded to the incident and commenced an investigation to determine the cause and circumstances of the incident. The mine operator and labour-hire company are cooperating with the investigation. Preliminary enquiries indicate that fatigue may be a causal factor.