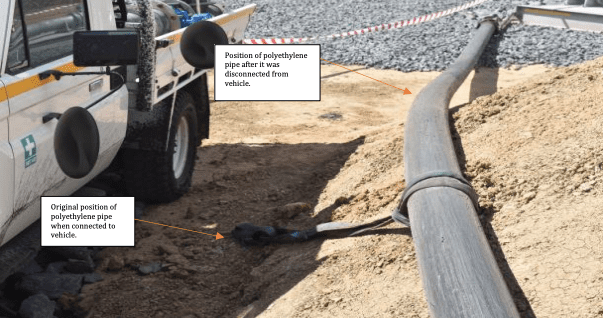 The Queensland Mines Inspectorate has released an alert to industry regarding stored energy in poly pipes and the subsequent risks from the potential release of energy during work involving poly pipe. The alert follows five coal mine workers receiving lower fractured legs since 31 October 2018.

The Inspectorate said that it is common practice to relocate lengths of polyethylene pipe by towing it with a mobile plant such as light
vehicles or small excavators. While undertaking these activities the pipe has become bowed for various reasons then suddenly released, springing back striking the coal mine worker who was positioned in the line of fire.

CMWs have also been injured when disconnecting piping from the towing vehicle and pumps. In these cases, the stored energy source had not been identified.

The Inspectorate said that there has also been incidents reported where the vehicle towing pipe has been damaged, including light vehicle rollovers or the vehicle itself being struck by the pipe.

A contributing factor in the light vehicle rollovers was the weight of the pipe towed being greater than the towing capacity of the vehicle. While these incidents have predominantly occurred at surface coal mines, the hazard of stored energy in
polyethylene pipe can also be present in underground coal mines.

Contributing factors to these incidents occurring have been: