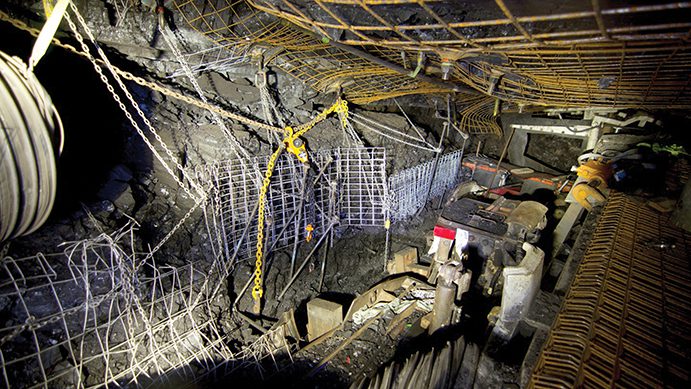 The following is the executive summary of an investigation report, prepared by the NSW Mine Safety Investigation Unit, into a double fatality at the Austar Coal Mine in New South Wales in 2014.

INCIDENT OVERVIEW
At 9.05pm on 15 April 2014, James Mitchell, 49, and Phillip Grant, 35, died when a major rib/ sidewall pressure burst occurred in a longwall development roadway (known as a gate road) during mining operations at the Austar Coal Mine, near Cessnock in the NSW Coalfields.

At the time of the incident, seven workers were operating a bolter miner and shuttle car to develop a gate road for a future longwall panel. The bolter miner had bolting rigs attached to each side for installing bolts in the roof and ribs to support the strata.

Mr Mitchell and Mr Grant were on the left side of the bolter miner when a major pressure burst of coal from the rib occurred. A large section of the left rib, which was supported with steel bolts and mesh, moved sideways into the roadway where the two men were working. Both men were engulfed by the rib material and died at the scene.

Coworkers attempted to rescue the men but the area was deemed unstable. The mine’s emergency procedures were initiated. Their bodies were recovered during the following days.

The incident occurred in a development panel known as Maingate A9 longwall development roadway, B Heading, about 25 metres inbye from the second cut-through. The incident site was approximately 10 kilometres in from the mine’s entrance and 555 metres vertically below the surface. At this depth, the sidewall (rib) and roof strata of the coal seam was subject to significant stress.

Maingate A9 was in a geologically disturbed area near an upthrow fault and shear zone. The workers were mining toward the upthrow fault when the incident happened.

INVESTIGATION OBSERVATIONS
The incident was a result of a pressure burst within the Greta Seam. A pressure burst is described as a dynamic energy release in the surrounding rock mass resulting in a rock/ coal failure ejecting the failed material into the mine roadway at high velocity.

The pressure burst was of such a magnitude and volume that it rendered the installed rib support ineffective.

The Austar mine operator was aware of the frequent relief of stress within the rib strata at the mine. These phenomena were commonly referred to as ‘pressure bumps’ and occurred regularly.

A previous major incident of rib failure occurred in July 2011, which was investigated by the mine. From this investigation, the mine operator formed the view that the pressure bumps indicated that the strata had settled and that these bumps did not represent a risk to people at the mine.

The methodology for ranking risk was confined only to considering occurrences in Australia. However, the geological conditions at Austar may not have been encountered previously in Australia and overseas lessons were not taken into account. Therefore, pressure bursts were not identified as a risk.

International research reveals that pressure bursts in coal mines generally occur at depths of more than 300 metres, with the majority of burst occurring at depths of more than 400 metres. That research also shows that the risk of a pressure burst is increased in areas of significant geological disturbance and the presence of massive strata in close proximity to the seam.

The incident occurred at a depth of 555 metres in an area of the mine subject to disturbed structural geology and variable thickness massive sandstone units in the near roof overburden.

A significant pressure bump had occurred on the afternoon shift 24 hours before the incident in B Heading of MG9 in close proximity to the incident scene. This was noted on the report of the deputy but there was no further action by senior management as the reporting of the pressure bump only went as far as the undermanager on the shift.

Austar had a strata control management plan but it did not explicitly identify the risk of pressure burst. An effective safety system must identify all plausible risks. By not adequately identifying the risk and then not seeking to fully understand the nature of that risk, it was not possible to manage that risk. As a result, the Austar safety management system could not properly respond to the pressure burst-prone conditions it encountered.

CONTRIBUTORY FACTORS TO THE INCIDENT
The investigation identified the following contributing factors to the incident:

RECOMMENDATIONS
The following recommendations are advanced to improve industry safety and reduce the likelihood of similar incidents occurring in the future.

When considering the recommendations below, mine operators are reminded of their obligation to manage risk in a systematic manner and take a combination of measures to minimise the risk, if no single measure is sufficient for that purpose. At a minimum, mine operators must apply the hierarchy of controls set out in the work health and safety legislation or equivalent to eliminate or minimise risk.

1. When developing strata control plans, mine operators should consider the following:

a) Research that considers all relevant information from Australian and overseas sources.

b) The history of the seam to be mined.

c) The provision of high level geotechnical support and the use of comprehensive geological data and mapping to inform strata management decisions.

d) Integration of the plan within the safety management system to ensure linkages with supervision, communication, training, monitoring/review and the management of major hazards.

e) Significant changes in strata conditions and/or geological conditions, such as rapidly increasing and decreasing depth of cover that triggers appropriate review and redesign of the strata control plan.

f) The presence of geological structures such as faults and dykes.

g) Increasing depth over 300 metres including static and dynamic pressure, coal composition and strata types of the roof, floor and rib structures.

h) The direction and nature of jointing of strata around the seam and cleating within the seam, especially localised changes in cleat direction, jointing and orientation.

i) The use of inseam exploration drilling to confirm geological structures in and around the coal seam.

j) The hierarchy of controls for managing risk.

2. When encountering pressure burst conditions, mine operators should consider the following:

a) Develop a pressure burst management plan that takes into account a complete worldwide literature search of publications relating to pressure bursts.

b) Review the history of pressure bumps and bursts in the seam to be worked across the mining district.

c) Identify all areas in the mine that may be subject to burst conditions.

d) Rate each identified pressure burst zone from low to high risk and develop appropriate controls as the level of risk rises.

e) Record the location, frequency and intensity of strata noise events (such as bumps).

g) Minimise the tasks to be conducted in the identified hazardous zones.

m) Weigh exploratory drill cuttings to determine volume of cuttings per metre of the insitu coal.

n) Review the mine’s communication system to ensure it is accurate, consistent and informs all levels of the workforce with relevant and timely information.