AMSJ » Mine workers tipped out of work basket 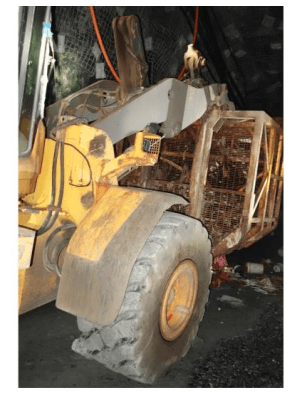 According to the Western Australian mining safety regulator, a significant high potential occurred where mine workers were tipped out of a work basket used with an integrated tool carrier.

The regulator has released a incident report which stated that “On 11th February 2020, a service crew were relocating a “jumbo box” and hanging an attached high voltage electrical supply cable. They were using an integrated tool carrier (ITC) with a work basket. “

“While hanging the electrical cable for the jumbo box from the backs (i.e. ceiling) of the drive, there was a catastrophic failure of the dog bone linkage on the boom of the ITC resulting in the work basket suddenly and unexpectedly rotating forward. The two workers in the work basket were thrown onto the ground. They received serious, but non-fatal injuries.”

“Both workers were using a fall protection system at the time, consisting of full body harnesses and fall restraint lanyards connected to anchor points on the work basket. However, the work basket was only a short distance above the ground and the lanyards were too long to restrain the fall.”

The dog bone linkage failed suddenly and catastrophically allowing the quick hitch to pivot freely under gravity. The cantilevered mass of the work basket and contents (gross mass in excess of 1500 kg) resulted in a very sudden and energetic rotation of the work basket which threw the two workers out onto the ground.

The fall protection system that the workers were using was designed to control the consequences of a much greater fall from height. Shorter lanyards or the additional use of fall arrest devices may have prevented the workers from impacting the ground.