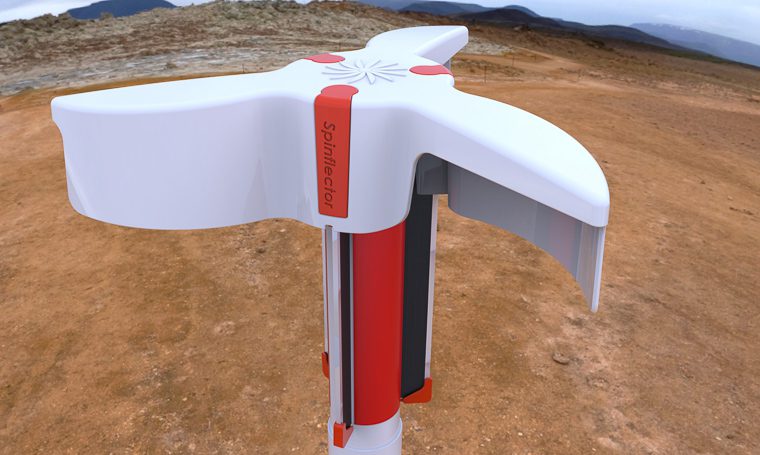 A WIND-powered device is being developed in South Australia to help maintain visibility and safety for workers on mine sites.

The Spinflector is a device to clean reflectors on delineator posts at mine sites to help maintain visibility for machinery operators.

Trampas Cutler developed the Spinflector in Port Lincoln, South Australia and has trialed them at an iron ore mine in the state’s Iron Triangle for the past five months without incident.

He said at most mine sites, teams of workers travelled almost weekly along major thoroughfares manually cleaning dust and grime from the reflectors, creating safety issues, loss of productivity and additional labour costs.

“It’s an endless job as the reflectors get dirtied with grime over and over again,” said Cutler, the Spinflector Industries Founding Director.

“That interrupts production because they have to put signage in place, they have to have clear radio communications with the trucks to tell them to slow down when they drive past and the massive safety issue of them being run over by a machine.”

The Spinflector is designed to fit on a 50mm PVC delineator post and contains a series of brushes to clean dust and grime from reflectors. The device has a built-in wind vane to power the brushes.

“Even on fairly calm days you’re always going to have the odd gust of wind and it only really needs to rotate about half a dozen times in a 48-hour period to take the layer of dust off and be effective – it just doesn’t allow a build-up of dirt,” Cutler said.

The mechanical engineer, who has spent many years working on mining sites, said ensuring the reflectors were clean was of upmost importance at night, especially given the remote nature of most mines.

“On a mine site you’ve obviously got no streetlights so apart from the machine’s headlights it’s completely black, which can be quite daunting for new operators,” he said.

Pre-sales have opened for the product with the commercial launch of the product expected by the end of the year.

Cutler said while most large mine sites had about 20,000 delineator posts, Spinflectors would not necessarily have to be fitted to every one.

“The delineators are anywhere between 25 metres and 50m apart so on busy intersections it would be good to have it on every post but on a long-haul road you could probably get away with having it on every third or fifth post.”