AMSJ » Falls from walkways and platforms 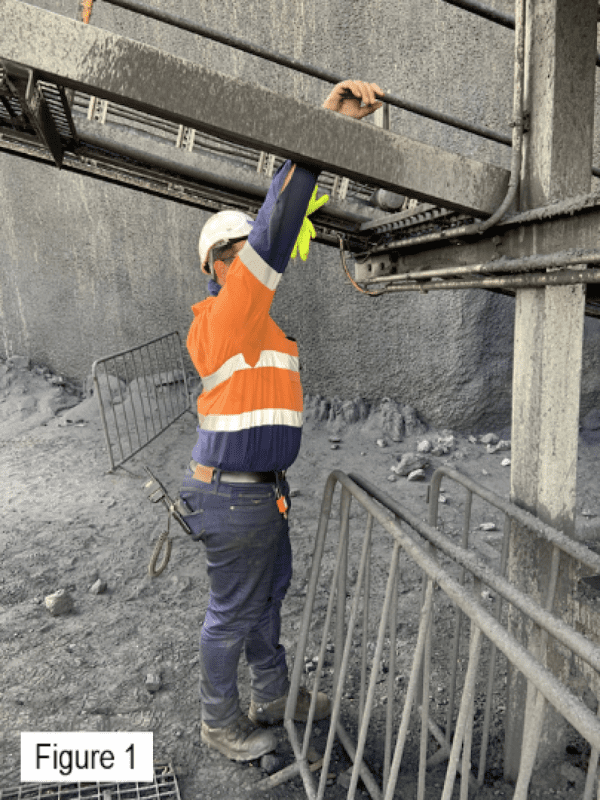 The Queensland Coal Mines Inspector safety bulletin has released two incidents regarding coal mine workers (CMW) have fallen through a mesh walkway and a mesh platform. In both incidents the coal mine workers required medical treatment, however, the potential existed for injuries to have been far more serious.

According to the report, one incident occurred on 27 January 2021, a coal mine workers was walking on a coal handling and preparation plant (CHPP) conveyor walkway. The section of steel mesh walkway the worker was on failed and fell through. The worker was able to lower himself to the ground through the open section of flooring using the handrails and adjacent steel structure for support. The worker was exposed to a potential fall of approximately two metres. The failed walkway and potential fall height are evident in the re-enactment shown in Figure 1.

In the other incident, on 4 February 2021, a worker fell through a section of steel mesh floor. At the time of the incident, a roller screen in a CHPP tertiary crushing station was being pulled back into position. The worker walked behind the work area and fell through a section of floor mesh that wasn’t secured. The displaced mesh floor is shown in Figure 2. The worker was able to stop the fall with his arms, however, he potentially could have fallen 8.6 metres as depicted in Figure 3.

Both incidents are still being investigated, however the following is known:

Key issues to be addressed by the Site Senior Executive

Site Senior Executive to ensure that: