AMSJ » Finding the bottom line for mine safety in Queensland 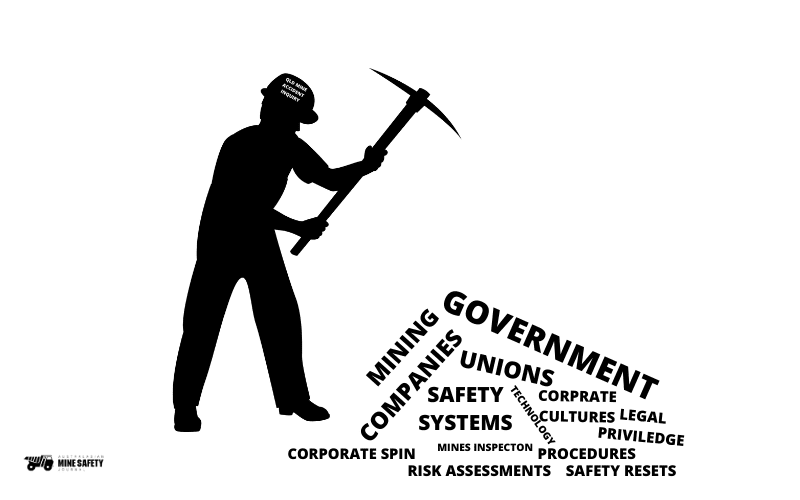 OPINION The recent Grosvenor mine explosion near Moranbah in Central Queensland has once again refocussed public attention on mine safety in the State. Frankly, though I’m exhausted that the lives of Queenslanders are continuing to be destroyed by workplace accidents.

As four miners lie in a critical condition (and one in a stable condition) at the Royal Brisbane and Women’s Hospital, a Government inquiry has been established, there’s talk of industrial manslaughter legislation being brought forward, an end to labour-hire agreements and there’s even calls for the relocation of the mine safety regulator to Mackay.

The drums are beating about the cause of the incident across the industry. Opposing the beating drums, the corporate spinmeisters and shaper’s of truth (who BTW have very big PR budgets) are seeking to shut down every murmur…in order to “protect the integrity of the investigation” and ensure that “justice takes its course” wink wink.

As I watched the political and corporate responses to this tragic incident unfold, as I have for many other tragic incidents before…I feel totally exhausted. Why you may ask?

I am exhausted from swimming in the rhetoric of governments and corporations that can’t (or won’t) own up to their responsibility for keeping workers safe. You know the likes…the Governments that oversee repeated deaths in the industry and the companies who repeatedly face court for fatalities or infringements but continue to operate through flaunting their generosity in the community and making the odd small political donation.

I am exhausted that ‘safety rogues‘ continue to operate in an industry that knows who they are…yet Regulators continues to put on ‘rose coloured glasses’ because, in some circumstances, production over safety is the underlying mantra that we all adhere to rather than the one written on our shirts. You know the type, they wear Towards Zero – Vision Zero, Zero Zero Zero but fail to demonstrate it in their actions.

I am exhausted by the grandstanding and political posturing of some Unions leaders following these tragic events that, while well-intentioned, often result in lame single-dimensional responses by their mates in Government that fail to address the heart of the mine safety issue. “It’s about the casualisation of the industry…but we need a safety reset,” they say.

I am exhausted that family victims support groups are deprived of their rights to access the highest levels of government to plead their case for the families who have suffered from tragedies.

I am exhausted that Government’s are so narrow-minded that they believe the threat of industrial manslaughter legislation will deter rogue operators in the mining industry.

I am exhausted from hearing the statement “we have the toughest mine safety legislation in the world” as miners continue to die or be maimed.

I am exhausted because I hear of the impacts that families face again and again following these disasters – lengthy battles with regulators and company suits to find out what really happened to their loved ones. Then even tougher drawn-out legal battles for compensation for the loss or maiming of their loved ones.

But most of all I am exhausted that miners, who simply are going to work to do their jobs are dying or being maimed in a society that should demand much better. Have we crossed the bottom line of humanity?

The Dutch group Loesj says “How many disasters do we need to unite humanity.” On the surface it seems a bloody lot!

The good Dr Anthony Lynham eloquently summed it up the other day in one of his responses to the latest tragedy. “An underground gas explosion in a coal mine is simply unacceptable in the 21st century. As serious as it was, it could have been far worse, as every underground coal miner and their families know,” he said.

Unfortunately, at the very heart of any disaster is the role of Government in preventing that disaster and ensuring that it can never happen again.

Accidents are complex beasts…an inquiry will be challenging

As we understand, there is never just one cause of an accident in any industry. Accidents are complex events.

They are seldom the result of one single action or event rather they are a combination of events, cultures, practices, education, technologies, environments that are underpinned and secured by regulation and governance from both a corporate and Governmental perspective.

Getting the real facts behind any accident is challenging at the best of times, irrespective of the model for incident causation that you might subscribe to. Finding the underlying issues in three months may be a challenge. Of course, defining a limited scope of the inquiry will help to bring a pleasant result prior to the launch of an election.

It will be highly dangerous for a Queensland Board of Inquiry to be influenced by its’ political masters such that the inquiry ends up searching for a broken technical part, person or organisation responsible.

The scope of Queensland’s Grosvenor mine safety inquiry, its’ independence of political interference and the methodology that it uses to come to terms with Queensland’s broken mine safety systems has the opportunity to set us on a safer future that is less exhausting…or it may not!

Just think about the acclaimed Brady report into mine fatalities for Mine safety Queensland….it’s taken us such a long way.