AMSJ » Mine worker missing at Henty Gold mine 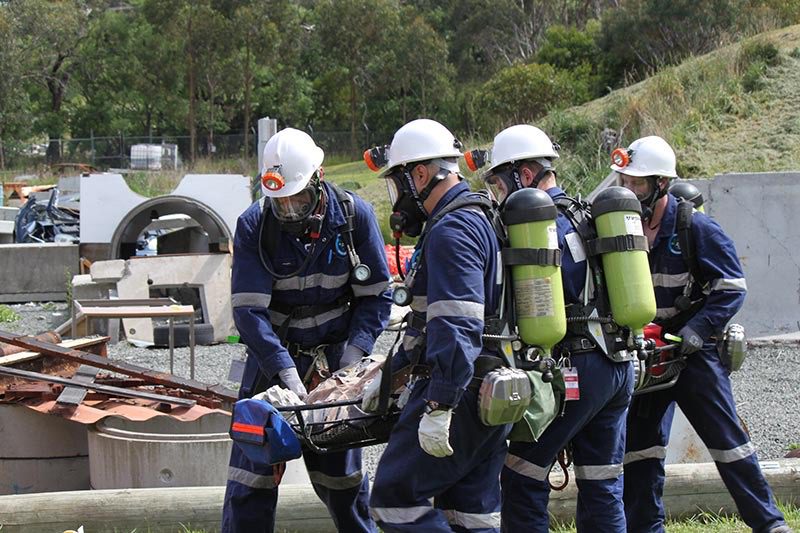 Police, mine safety officials and mine search and rescue are currently on the scene in Tasmania’s northwest where a mine worker has gone missing following a fall of ground ( mine accident) in the underground at the Diversified Minerals, Henty Gold mine.

Local news has reported that the mineworker was reported missing about 4 am after his colleagues could not make communications contact with him and entered the area he was working in, about 20 minutes of descent underground. A mine search and rescue team was mobilised immediately.

“The three men found a section of earth collapsed and were unable to locate their colleague. They went back to the surface and raised the alarm”

The West Coast Council Mayor Phil Vickers told ABC local media that the miner is local to the area.

“That’s all we know at the moment, workplace standards and emergency services are on the scene,” he told the ABC this morning.

“Thoughts and prayers are with the family of the missing man, Henty Mine staff and the emergency services at this time” he said.

Representatives from Work Safe Tasmania Mines Inspector are reportedly on their way to the scene of the incident. The site is owned by Diversified Minerals and with its parent organisation Pybar Mining Services.

Mine personnel are fearing the worst for the man trapped underground following a fall of ground. Mineworkers say the man is Queenstown local who had around two years experience working for Pybar Mining Services at the Henty Gold Mine.

Earlier efforts have not shown any signs of life although workers at the site are clinging on to hope that they will find the miner alive.

“Our hopes are that they will find him alive, but we now fear the worst,” a mine worker from the site told AMSJ on condition of anonymity.

“The mood has changed from upbeat early in the morning to pretty bloody dismal,” the mine worker said.

Police have grave fears for the miner trapped underground at the Henty Gold mine. “It’s probably 11, 12 hours now that the person’s been missing, so the sooner we get back down there, the better,” Tasmania Police Inspector Shane Le Fevre said.

In a press release this afternoon, police said search crews had “returned to the surface after using a thermal imaging drone and a robotic camera to investigate the collapsed area”, which is on Tasmania’s west coast.

“They are currently reviewing the footage from the scene and have not yet located the man or identified signs of life.”

“We have reached out to our members and spoken to a number of workers who are understandably shaken,” he said in a statement.

“In circumstances such as these,  rescue efforts are extremely delicate and sensitive and our full support is with the specialists.”

“Our immediate priority is to ensure the welfare of the person not accounted for and the safety of those involved in the rescue,” Pybar chief executive officer Brendan Rouse said. “Pybar are working closely with the Henty site team to establish the extent of the affected area. We are doing everything possible to ensure we access the area as safely and as quickly as possible.”

Police and emergency services are currently on the scene at Henty Gold Mine on the West Coast where a mining worker is missing underground.

The worker was reported missing about 4 am after his colleagues could not make communications contact with him and entered the area he was working in, about 20 minutes of descent underground.

The three men found a section of earth collapsed and were unable to locate their colleague. They went back to the surface and raised the alarm.

When they deem it safe the mine’s rescue team will commence searching.

Work Safe Tasmania and the Mines Inspector have been notified.

Diversified Minerals – Henty Gold Mine search update at 11 am

The search for a missing mine worker at Henty Gold Mine on Tasmania’s West Coast will utilise a thermal imaging drone and a robotic camera to search the area of collapsed earth.

Officers from Tasmania Police’s Bomb Response Group are preparing to head underground as close as safely possible (likely to be approximately 50 metres) from the area of collapsed earth to utilise a robotic camera to search for the mineworker missing.

The mine’s emergency response team will utilise the information from the drone and the camera to locate the man and develop a plan for evacuation.

Ambulance Tasmania is also part of the crew heading underground.

A media conference with police and other involved representatives is tentatively planned for 1pm at Henty Gold Mine.

VIDEO INTERVIEW THIS MORNING REGARDING THE MINEWORKER MISSING

Has mine search and rescue recovered the mineworker missing at the Henty Gold mine?

At this stage, the mineworker has not been recovered. It is expected that the recovery effort may take several days. Mines Rescue and recovery experts are being flown to the site. The condition in the mine are somewhat unstable according to a representative from Pybar Mining Services.

What was the cause of the mine accident that left a miner trapped in the Henty Underground Gold mine?

It’s still too early to say. AMSJ understands that a fall of ground occurred and it trapped an operator who was operating a loader LHD. It is unclear if the miner was in the loader at the time of the fall of ground incident.

Is the trapped mineworker still alive?

What is the name of the miner trapped underground?

The name of the miner is Cameron John Goss, 44 of Queenstown Tasmania.

What is the name of the company where the trapped mine worker worked?

We are informed that the miner was an employee of Pybar Mining Services.

Have there been many mine safety incidents at the Henty mine?

AMSJ has conducted a search of archives and has not identified a past history of publicised high potential incidents at the Henty Gold mine.