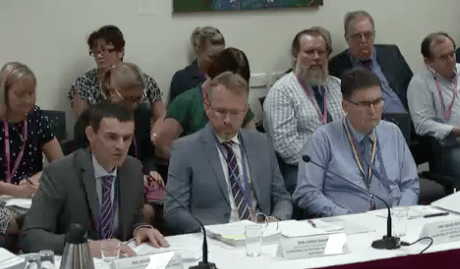 A Queensland top mine safety bureaucrat has told a Parliamentary Committee into the Mineral and Energy Resources and Other Legislation Amendment Bill 2020, that the Department’s Mines Inspectorate attended 80-90% of safety resets across the State.

Mark Stone, (Executive Director of Mine Safety & Health) and Queensland’s top mine safety mandarin also told the inquiry that “52000 workers participated in 1197 resets across the state and we believe that that represents some 96% of the workforce.”

Queensland Member for Buderim, Brent Mickelberg asked: “Mr Stone, did the Department have attendees at each of the resets?”

Mr Stone replied “I’d have to check but I will say that the Department made, we have 46 inspectors of mines, 3 district workers representatives. I am pretty certain that we would have hit 80-90% of the resets. There were some that took place in remote areas of the state where logistically it was not possible for us to get to. I attended three resets myself and I know that my inspectors of mines attended many many resets.”

Stone told the inquiry that “During those safety reset workers discussed a number of aspects, they discussed the safety culture at their site, they discussed the nature and cause of the accidents that had happened with the industry, they talked about critical hazards, fatal hazards and whatever was specific to that site and I understand that they covered large open-cut mines underground mines and quarries and some resets were held in head offices and outside of the state.”

Stone said that the rationale for the Queensland Government requiring that Statutory Personnel should be employed by mining companies arose “from those safety resets feedback included fear and concern over raising genuine safety incidents and while, reprisal provisions are included in the Mining QuarryingSafety & Health Act, nonetheless, that concern over reprisal was raised in those resets and to the Department.”

Mr Stone replied “I don’t have that number in front of me…the amount that raised concerns I can confirm an independent survey was conducted, a confidential survey, and I know that we had just shy of 490 responses to that survey and that a number of them, I can’t remember, but I will be happy to provide it on notice. The details of your question on notice.”

The inquiry has heard from a number of respondents that concern has been raised across the industry that the Queensland Government’s responses to mining companies employing statutory officials was made “on a whim” and the Department has sought to back up its’ rationale for implementation of the statutory changes on the basis of surveys conducted following resets.

AMSJ understands that the results of the Department’s survey may also have been compromised and that respondents to the survey included personnel who has not been involved in safety resets in the Queensland mining industry.