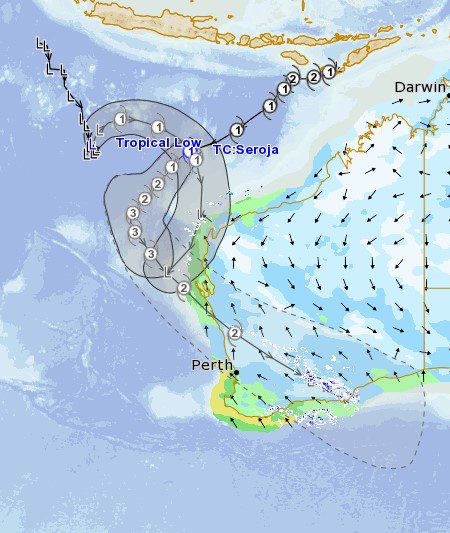 Western Australia is expecting intense wind, rain and possible flash flooding forecast for the west coast from Onslow to Perth this weekend and Monday. The first impacts to WA are expected on Saturday night around Exmouth.

Tropical Cyclone Seroja is tracking parallel to the coast and will likely impact sections of the Pilbara and Midwest-Gascoyne regions over the coming week.

“Recent rainfall and flooding has already battered the northern half of WA during the current cyclone season.”

“Some roads in the area are still undergoing maintenance to repair damage from recent flooding events and Tropical Cyclone Seroja has the potential to cause further damage making roads unpassable for days, if not longer.”

Late Sunday or Monday Tropical Cyclone Seroja is expected to cross the coast, most likely in the area between Carnarvon and Jurien Bay.

Destructive winds with gusts around 150 km/h and intense rainfall conducive to flash flooding are expected near the system as it moves over the coast.

Heavy rain and damaging winds are expected to continue inland through the Wheat belt on Monday.

Tropical Cyclone Seroja is forecast to be travelling very fast so the worst conditions at any location will last from 3 to 6 hours.

While a direct impact to Perth is unlikely, a period of heavy rain and strong easterly winds is possible.

Two main influences have led to Tropical Cyclone Seroja’s expected movement south out of the tropics.

The Fuijiwhara Effect, or the interaction between tropical low 23U and TC Seroja, have influenced TC Seroja to take a more southerly track.

Cyclones that form in April in the western region typically have a greater chance of moving south out of tropical regions.

Higher than normal tides are expected along the western coast.

Closer to where the system tracks significant storm surge is expected and could exceed Highest Astronomical Tide.