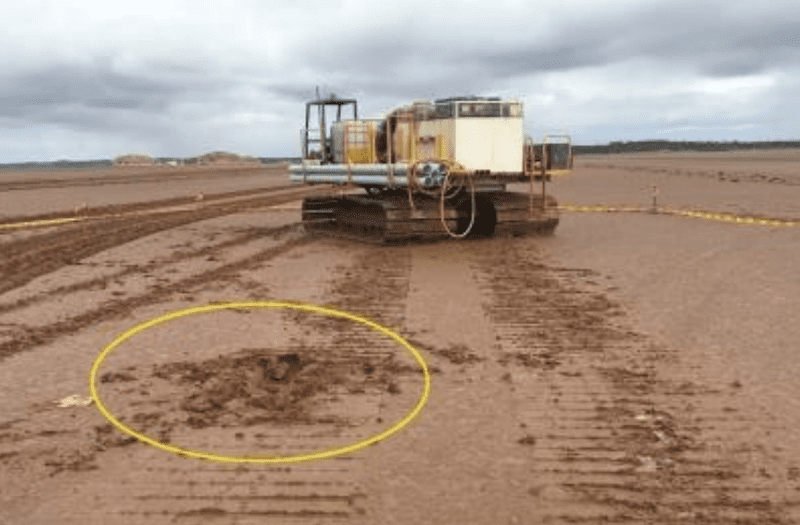 The WA Department of Justice (State Solicitor) has dropped charges against a drilling company for a mobile plant accident where a drilling offsider was run over by a tracked vehicle on a salt lake in 2016. The incident stemmed from the strapping of control levers that permitted the mobile plant to continue in a forward motion without an operator.

According to DMIRS records, in August 2016, a drill offsider was tramming tracked mobile plant on his

own, returning to the shore of a salt lake to refuel.

Both of the mobile plant’s control levers were strapped in position so the vehicle could move forward without the offsider continuously holding the controls. As another tracked vehicle approached, the offsider alighted from his vehicle and walked over to talk to the two occupants.

After a brief conversation, the offsider returned to the mobile plant which was still moving forward on its own.

He slipped and fell while trying to climb back into the cab. The mobile plant ran over him, with one of the tracks passing along the length of his body. A person from the other vehicle managed to stop the unmanned vehicle, which was clear of the offsider. Fortunately, the ground was very soft and the offsider was pushed down into the ground by the mobile plant’s track. He had injuries to his head and face and a fractured hand.

Kalgoorlie-based Raglan Drilling was charged over the incident in 2016 but had lodged a not guilty plea. The court hearing was scheduled for trial in July this year however, the prosecution couldn’t supply the witnesses to the event.

The State Solicitor’s Office told the Kalgoorlie Magistrate’s Court yesterday that they wanted to discontinue the case due to the “unavailability of key witnesses” including the worker who was run over in the incident. The worker has not been contactable by the Department and is believed to be living “uncontactable” outside Australia.

In dismissing the charges against Raglan Drilling for the mobile plant accident, Magistrate Adam Hills-Wright awarded the company $12,000 in court costs, calling it “fair and reasonable” given the circumstances.

In a statement issued by, Andrew Chaplyn, Director of Mine Safety, the department confirmed the injured worker has left Australia and the department can no longer make contact with him. According to the court documents, there were only two witnesses to the mobile plant incident, the operator and a now-deceased person.

“The department’s decision to investigate this case, and then prosecute the company for a breach of the Mines Safety and Inspection Act was based to some extent on the potential severity of the incident,” Mr Chaplyn said.

“The decision does not set a precedent. This is an unusual outcome based on a tragic circumstance.”