AMSJ » Re-entry to Pike River Mine to recover 29 bodies 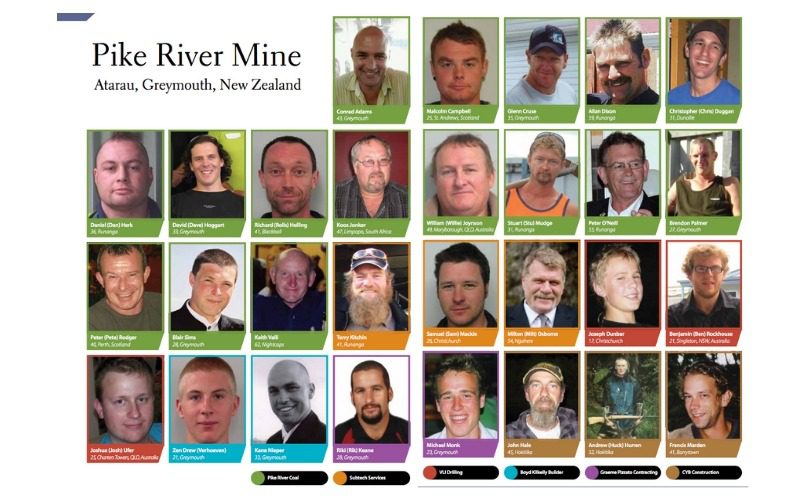 Bringing home the boys from Pike River mine

Re-entry to Pike River Mine in the NZ to recover the bodies of 29 miners, who perished in a mine explosion in November 2010, is likely to occur before Christmas some family members say.

Dinghy Pattinson the Chief Operating Officer of the Pike River Recovery Agency said “We’ve been planning getting hold of a nitrogen plant for some months, as it’s crucial to being able to safely re-enter the Pike River Mine.  He added that “Today (1/10) is a really important milestone for the Agency, even if there’s still loads of work to do before it’s up and running.”

The mine recovery team hope to create an inert atmosphere in the mine and undertake a manned re-entry under compressed air breathing apparatus (CABA) however, an independent panel made up of mines rescue personnel, police and family members is considering a total of three options for re-entry to the mine (see below).

The fabrication of emergency remote closing doors has also commenced. The doors will be installed in the portal to allow controlled entry without disturbing the atmospheric conditions.

Families hoping for a thorough investigation this time around

Families have sought for a further investigation into the disaster for some time, failing to accept the evidence and many finding from the Royal Commission into the event and police statements. In January 2018 the NZ Government formally established the Pike River Recovery Agency to establish a plan for re-entry, recover the bodies of loved ones and rehabilitate the site.

According to reports, a range of senior police forensic investigators have been in Greymouth preparing for re-entry to the mine. It is anticipated that they will re-enter the mine with Mines Rescue personnel and gather evidence from the scene before bodies are removed. Police have said that they are not ruling out new criminal charges being laid.

Recent unseen video footage from inside the mine of a fully clothed miner lying on the ground in the mine has come to light.  It has contradicted police reports, Royal Commission assumptions and expert evidence who have stated that the miner’s bodies were likely incinerated in the explosion. The NZ Government has also stated that no bodies could have survived the explosion.

Documentary maker on the Pike River Disaster Tony Sutorius said recently  “It’s acknowledged, in fact, by the police and the Chief Executive of Solid Energy that [the footage] does show a fully intact, clothed miner,” he said.

“He’s lying on the ground, he has his knees slightly raised you can see the tread on his boots… Police Commissioner Howard Broad was saying at the same time that this image was shot that all they were, were a pile of ashes, and the families just had to accept that there was nothing there and it was time to walk away.

“It wasn’t true. If you look at these images down the mine there’s wooden pallets, there’s plastic buckets, there’s rubber hoses. It wasn’t an inferno down there – that was simply never true.”

Workshops to assess risks of the re-entry have been held over the last month. Watch a short video of the risk assessment workshop here.

Chief Executive Dave Gawn of the Pike River Recovery Agency announced recently that “The rigorous process to look at the risks around the three re-entry options being considered for the Pike River Mine has turned up no “showstoppers”.

The risk assessment workshops involving experts and family members and polic have assessed three scenarios for re-entry into the mine including:

A final sign off for the re-entry will be approved by the Minister for Pike River Recovery, Andrew Little.

Lessons for the Mining Industry from Pike River Mine

The retrieval of bodies from a significant mine disaster event may present a range of implications for the underground mining industry in Australia and New Zealand.

Firstly, the industry has often relied on assumptions made by industry experts about the conditions existing in the mine at the time of the disaster or post disaster. These assumptions have largely been based around gas monitoring data/samples taken from boreholes or via tube bundle systems. While we recognise that this evidence is important in determining the condition of a mine, it is only one form of evidence and may or may not indicate the survivability of persons in the mine. There are multiple variables in determining survivability post a major disaster event and adopting a holistic viewpoint with multiple sources of evidence is essential to determining the facts.

Secondly, the power held by stakeholders in a tragic event is now evident. The families of the 29 miners killed in 2010 have not rested in their call for re-entry and re-assessment of the facts based on circumstantial evidence. Despite a Royal Commission into this event, the families’ determination in calling for specific evidence-based answers is admirable. Their distrust of authorities and experts in refusing to accept their (authorities and expert) opinions on the re-entry also shows that the justice may be in the hands of the stake holders…not a commission of inquiry. The families have shown that persistent stakeholders may ultimately disrupt the agendas of Governments and other’s running agendas to “put to bed” the incident and move on.

Finally, the industry should consider that in some instances self-escape may not be possible due to conditions in the mine and that retrieval of personnel from refuges should form an important component of a miner’s rescue plan. The long-held view by some in the industry that all the miners who survive a disaster event will be able to self-escape post a fire or explosion is worth reconsideration. By having a holistic rescue/recovery plan that defines all circumstances to recover miners post a disaster (whether it be from a refuge or roadway), organisation’s might be able to provide some solace to family members who have a right to know the facts (rather than assumptions) and recover their loved ones from entombment in a mine. Read more on the Box Flat Mine Disaster.

The Pike River Recovery Agency has an important role to play for the mining industry and the relatives of those who perished in this tragic event. As additional evidence is gathered and the bodies of the miners are recovered, the learnings for industry will be critical to making sure that the mining industry doesn’t make the same mistakes of the last fifty years. Here’s to the families of the Pike River miners for their steadfastness and determination in seeking the truth and making the recovery a reality.