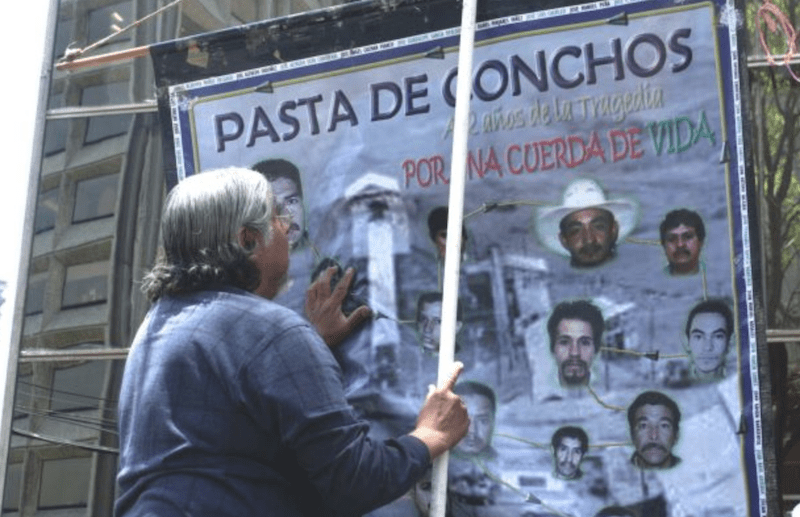 In scenes reminiscent of the Pike River mine recovery announcement, the President of Mexico, Andrés Obrador, has announced a mines rescue recovery mission to find the bodies of 63 miners trapped in the 2006 Pasta de Conchos coal mine explosion.

Pledging to the families of the mine workers  the President indicated he would call assistance outside Mexico to assist with the recovery effort saying “If necessary, help will be requested from the governments of the United States, China and Germany, with experts, to rescue the bodies of the miners caught in the Pasta de Conchos explosion.”

The Pasta de Conchos mine gas explosion killed 65 miners. Mines rescue teams were only able to recover the bodies of two miners following the February 19, 2006 coal mine gas explosion. Eleven mine workers survived the disaster and were rescued, suffering first and second-degree burns. The mine was being run by mining giant, Grupo México.

According to available information, on February 23rd 2006, mines rescue recovery operations teams reached parts of the mine where some of the workers were believed to have taken refuge, however, there was no sign of the mine workers.

There was some conjecture regarding the survivability of the disaster and gas explosions. Some company representatives believed ‘the force of the explosion knocked them through the mine shaft deeper than they had anticipated.’

The following day the Grupo México rescue team advanced approximately halfway into the 2.8 km long mine, where an additional twenty-four miners were expected to have been found. Again, nobody was found, and Grupo México hypothesized that either the miners were buried under debris or the miners were located in a deeper part of the mine.

On the evening of February 24, Grupo México announced that search efforts were to be suspended for two or three days, due to the search teams advancing to a portion of the mine which leaked out high levels of methane levels.

On the afternoon of February 25 the CEO of Grupo México confirmed during a press conference that “there was no possibility of survival after the methane explosion”, based on a scientific report. The following day the Secretary of Labor, Francisco Javier Salazar Sáenz, and Governor Moreira announced the mine would be closed indefinitely once all the bodies were recovered.

According to Mexican newspaper El Universal, Grupo México had argued at the time that between 25 per cent to 75 per cent of the mine was flooded. It also stated that the bacterial contamination inside the mine could have compromised the lives of rescue workers, their family members and nearby residents. Workers were believed to have either incinerated from the blast or were killed in roof falls that resulted from the explosions.

Legal arguments also mounted prior to the re-entry and the IndustriALL union argued that the real cause of the disaster was never identified however a special prosecutor for the case blamed Grupo Mexico for the concentrations of methane, heat and oxygen to build up in the mine. The proescutors also argued that ventilation shafts or stone dusting techniques could have neutralised explosive coal dust.

Mexican Government inspectors who failed to enforce mining safety regulations were also implicated in the disaster.

The recovery announcement  welcomed by families of deceased miners

President Obrador’s, (Mexico’s socialist leader) announcement coincided with Mexico’s Labor Day holiday. He said, “he did not expect the company that operated the mine to oppose him.”

‘This is an act of justice and it’s also a commitment we made going back a long time,’ the president told reporters at his regular morning news conference.

The President also confirmed that the owner of Grupo México would not oppose the recovery efforts.

“He sent me a letter stating his views that they had made the attempt, that they had not been able to rescue the bodies, but that he accepted to help and collaborate, that he put at the disposal of this effort the elements that were needed, ” he said.

Saying that there would be no price tag on the recovery, the Mexican President said ‘whatever is necessary ‘will be spent to ensure the recovery was successful.